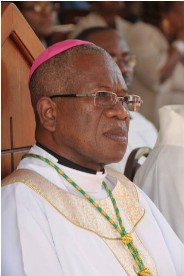 On Saturday, October 25, 2014, our confrere, Most Reverend Quesnel Alphonse, SMM of the Province of Haiti, was named ordinary of the Diocese of Fort-Liberté.  Since December 2012 he has served as an auxiliary bishop of the Archdiocese of Port au Prince.

Bishop Quesnel made his first profession as a Montfort Missionary after completing his novitiate in 1972.  His philosophical and theological formation took place in Port-au-Prince and he was ordained a priest on the Feast of Our Lady of Mount Carmel, July 16, 1977.

Bishop Quesnel is known throughout the Congregation for his collaboration in the work of formation and as parish priest. He was director of the Office of Catechesis of the Archdiocese of Cap-Haïtien and served as Provincial Superior from 1990-1996.  For many years he has helped with the vital service of communications and the sharing of news service in Haiti.

His new diocese is located in the northeastern section of Haiti, very near to the border of the Dominican Republic.  According to the Vatican Information Service the Diocese of Fort-Liberté has a population of over 371,000 Catholics that is served by a prebyterate of 48 priests and also 68 religious.

The patron of his cathedral is Saint Joseph whose intercession we implore now for our confrere as he undertakes his new mission.  May St Joseph guide him each day to care for the people whom God has entrusted to his care.