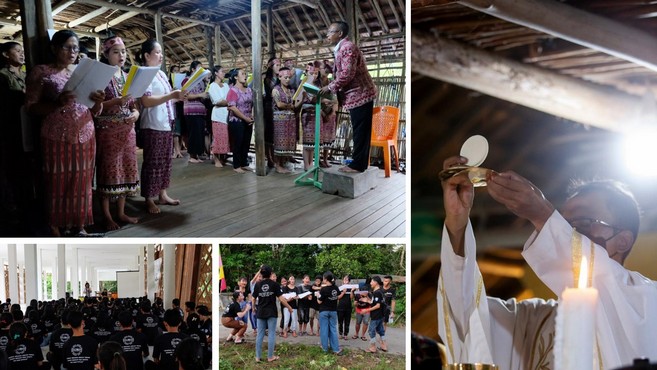 LEBANG, Indonesia - In celebration of the SMM Mission in Asia-Oceania 2022, the Ratu Rosari Parish in Lebang held a Grand Gathering of Young Catholics. “Moving together towards light while being strongly rooted in Catholic faith and culture” is the theme of the Grand Gathering. Grand Gathering was held on May 6-8, 2022. With only 150 participants, which is lesser than the first Grand Gathering in 2019, it did not dampen the enthusiasm of young people to meet and carry out activities that were scheduled at the beginning of the year during the plenary meeting of the Parish Pastoral Council.
The second Grand Gathering was held at the Ensaid Panjang Long House (Betang), South Rentap Hamlet, Ensaid Panjang Village, Kelam Permai District, Sintang Regency. Ensaid Panjang Station is one of the 36 stations in the Lebang Parish area and the only one that has a well-known cultural asset in Sintang Regency, namely the Betang Traditional House. The Betang Ensaid Panjang longhouse has 27 booths that serve as accommodation for the participants so that all events are held in one location. In this manner, the participants can also get to know and feel the way of living in Betang House.
The short preparation of approximately 40 days was enough to make the committee work extra, since the first activity was not held at the Parish Center and cultural assets. Approximately 50 committee members, more than the host OMK itself, namely the Ensaid Panjang Station, was assisted by several coordinators from the Parish OMK Core Management. The people in Betang and the Ensaid Panjang Station also supported this activity with various efforts, both morally and physically, by helping from the preparation to the implementation of the activity.
As an effort to introduce culture to Grand Gathering participants, this time, it was filled with very exciting activities by holding a Clamping Contest, Rice Pounding Contest, and Psalm Contest. There were also art performances filled with traditional dances, TikTok dances, and many more exciting performances from the participants. Outbound was a favorite to allow the participants to mingle and get to know each other in this activity. There was also a Penance Service and confession of sins which are always requested by the Catholic youth if an activity is to be held.
The Catholic Youth Grand Gathering which was held at the Ensaid Panjang Long House was also attended by the Head of the Youth, Sports, and Tourism Office (Disporapar) of Sintang Regency as well as provided material on the Young Generation and Culture. Then the second material was filled with material on the use of social media by Father Stefanus LEBA, SMM who also holds social media belonging to the SMM. The next material was filled in by the Parish Head Priest, Father Marselinus NGEBU, SMM who gave enlightenment about maintaining the Catholic faith for young people. And it is no less important about managing the future for young people given by Credit Union of Tepian Taduh.
Seeing the increasing number of outside influences, especially the use of social media which makes it easier for young people to access everything, and the increasing number of cases of early marriage, religious conversion due to a spouse (married), and young people who do not think about preparing for the future by having their own savings, material- the material is very useful for young people and is easily accepted. It is hoped that young people will be able to know and control themselves so they don't get carried away with today's world, have thoughts about investing from an early age, and how to maintain the catholic faith which is inherited from parents who were baptized since childhood. It is also important to get to know and maintain their own culture and customs so that they are increasingly embedded within themselves as young people.
Fr. Stefanus LEBA, SMM