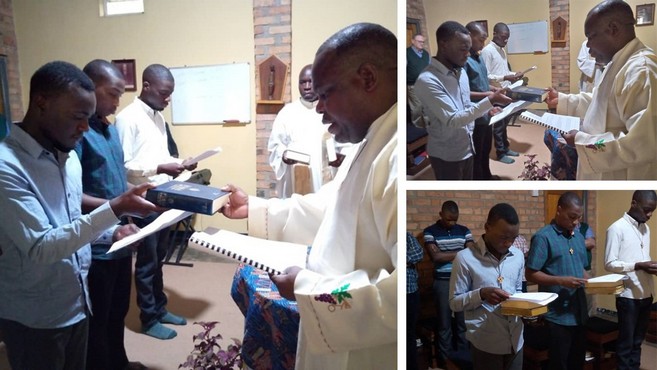 MBARARA, Uganda – On 6th August 2022, at 7:30 a.m., the three postulants commenced their novitiate formation process. The Holy Mass was presided over by the Superior of the Africa Anglophone General Delegation, Fr. Lonely Paul MASHONGA, SMM.
These candidates who were ushered into the novitiate stage of formation are Iragena Charles ATEGEKA, Chancy MTERERA and Sebastian Moses MOYO. They were introduced by Fr. Ernest AKHONYA, SMM, the novice master. The superior and the candidates then had a dialogue in which the candidates expressed their desire to enter the novitiate stage of formation. The superior responded by accepting and admitting them into the novitiate. He noted that the desire of the candidates is a special love of God. It is this love that impels an individual to join the novitiate and the same love sustains him throughout the Novitiate.
Fr. Paul likened the novitiate stage to cultural initiation ceremonies. In these ceremonies, a young person is trained to live the cultural values. It’s an intensive period in which the culture passes on its values to the younger generation and so is the novitiate stage. It’s designed to instil in the candidate the essential religious values; in this context, the Montfortian values. The novitiate year that Montfortians undergo facilitates the growth and maturity of the novice in his relationship with God, other people (most especially his fellow community members), the self and the environment.
The relationships mentioned above are brought to fruition by following Christ up to the cross, living poor, obedient, chaste, participating in self-sacrifice, being faithful to a life of prayer and observing the law of charity. This echoes the four means of acquiring divine Wisdom that St. Louis-Marie de Montfort lays down in the Love of Eternal Wisdom. These are ardent desire, continuous prayer, universal mortification, and a loving and genuine devotion to the Blessed Virgin Mary. Men imbued with these values are those that St. Louis-Marie de Montfort referred to in the Prayer for Missionaries paragraphs 7-12. The novice assimilates the values of Montfort missionaries in the hands of Mary. To this extent, the novitiate stage of formation in the Montfortian perspective can be referred to as the school of Mary. The novices, in this school, are moulded in the likeness of Jesus Christ in the mystery of the incarnation. Thus, the novice can say with the apostle Paul “I have been crucified with Christ; yet I live, no longer I, but Christ lives in me; in so far as I now live in the flesh, I live by faith in the Son of God who has loved me and given himself up for me.” Gal 2:19-20.
The ushering in of candidates for the novitiate stage is a joy of every member of the Montfortian family. Above all, it is God’s answer to the prayer of St. Louis-Marie de Montfort, that is, Prayer for Missionaries number 6.
Iragena Charles Ategeka
Novice