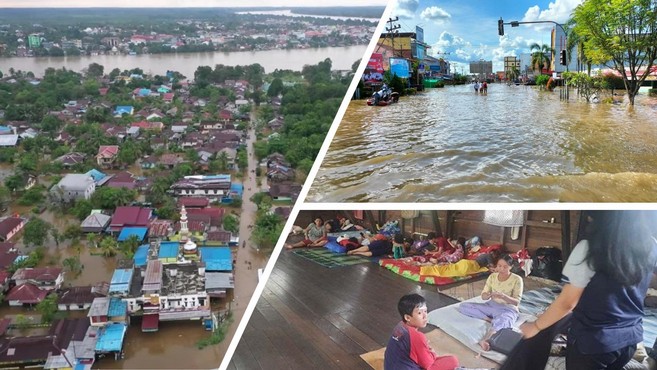 SINTANG, Indonesia - It has been more than two weeks that the town of Sintang in Indonesia is still flooded. The pathetic situation has been going on since October 21, 2021. So far, the water level has shown no sign of receding, on the contrary, it is rising. Indeed, in the first week, the water level was not too high as to deter residents from working and doing several activities. But, over the past week or so, the water level has risen in some places. Particularly on the banks of the Kapuas River, the water depth is about 1-3 meters. According to people here, these are the worst flash floods seen in Sintang.
This flooding was caused by the torrential heavy rains, so that the two main rivers that border the town of Sintang overflowed. The town of Sintang is right at the confluence of the Melawi and the Kapuas rivers. Almost every night, heavy rains accompanied by lightning and thunderstorms are causing havoc to the community. Even as I write this news, it is still raining in Sintang.
Currently, the city of Sintang is still in a state of emergency. According to data obtained on Sunday the 7th by National Disaster Management Authority, the flood submerged 21,000 houses and 24,522 heads of families (87,496 people) were evacuated. The government has so far provided 14 temporary shelters and camps for the displaced people. The street in front of our usually quiet community in Menyurai has turned into a fairly busy alley. We often see vehicles transporting displaced people. This flooding has also resulted in the paralysis of traffic within the city and all traffic to the city of Pontianak is halted, although in several places there have been agents who have helped to make the crossing. Residents cannot, of course, carry out their daily activities in such conditions.
Fortunately, the Montfortian community, in the town of Sintang, is not affected by this flood, due to its location on a hill. Although sheltered from the flood, the Montfortians of the community of Menyurai, Sintang, felt united in the face of difficulties encountered by the residents hit by the flood. The Montfortians therefore moved in quickly to support the flood victims. As a form of commitment to show God's mercy to brothers and sisters in difficulty, Montfortians are doing what they can to assist the displaced people:
First, provide a place for refuge. The Montfortians of Menyurai offered two places for refuge. First, "Hall", which is a building belonging to the Montfortians for meetings, retreats and recollections. This building is located in front of the Montfortian community of Menyurai but outside the community complex. On Thursday, November 4, 2021, 9 heads of families took refuge there. Among them are pregnant women, children, the elderly and the sick. Then, others are taking shelter at the employee premises located in the Menyurai community complex. This second building has not been occupied by employees for a year, as residents have retired. On Sunday, November 7, 2021, two heads of family took refuge there, because the “Hall” was full. The house is still spacious enough to accommodate few flood victims. When these two buildings are full, there is still a third building that can be used as a camp.
Second, visit the flood victims. In addition to providing camps, the Montfortians also visited the displaced people and families affected by the floods but who had not yet been evacuated. There is a disaster camp in which anguished people are really struggling: widows, the elderly, children and the sick. There is also a village where there is a family of women who have not yet been evacuated. After going there, Father Yohanes SUMADI, SMM who is the superior of the Montfortian community of Menyurai declared: “These people are our priority. They are the first to be loved. The displaced people in the “Hall” are fairly well-off people. They only need a place to take refuge, while the inhabitants of this village are all in real need”.
Third, distribute groceries. The Montfortians of Menyurai not only visited the survivors, but also provided them with basic necessities (rice, noodles and cooking oil) especially to those who really needed them. The Menyurai community itself does not have an abundance of basic necessities.
Fourth, coordinate with the village chief where our community is located and with the local “Village Counselor” regarding efforts to assist the displaced people. In doing so, the Montfortians are present in the midst of people in difficulty and show them that they are not alone.
Fransiskus S. Bembid, SMM
Sintang, Indonesia