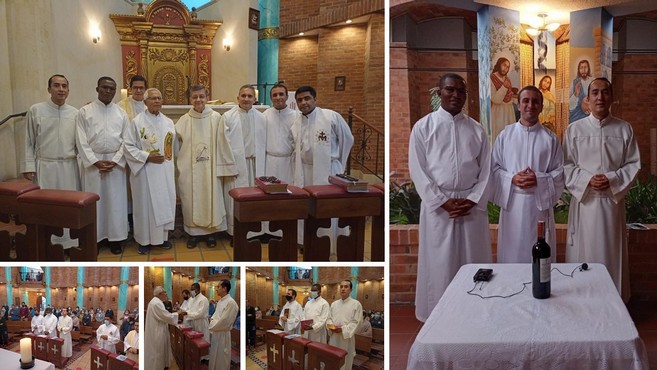 PAIPA-BOYACÁ, Colombia - On April 20, in the middle of the Octave of Easter, around 5:00 in the afternoon, the stage of the Latin American Novitiate 2022-2023 was inaugurated in the city of Paipa-Boyacá. The opening was given by the Provincial of Colombia, Fr. Jorge Enrique GONZÁLEZ, SMM, who was accompanied by other SMM priests: Fr. Manuel MORA, bursar; Fr. Álvaro PULIDO, Vocational Animator and Fr. Armando NOVOA, who studies Accounting in Bogotá.
This Novitiate began with three young people from three different places: Vitor, a Brazilian; Jean Marie, a Haitian, from the Peru-Brazil delegation; Diego Alexander, a Colombian who represents the province of Colombia. They are three young enthusiasts, entrepreneurs and eager to live this experience of initiation into religious life under the guidance of St. Louis-Marie de Montfort and the Blessed Virgin Mary.  The small communities of new evangelization participated in the celebration and there were about 80 people. These communities have played an important role in the formation of novices here in Colombia, because many of them accompany young people to carry out their apostolate in the countryside, pray for their perseverance and inject joy and human warmth into this house of formation.
The novice master, Fr. Benigno Zorro CORREDOR, SMM, newly arrived at this house of formation, as he was in a missionary experience in the parish of San José Obrero in Puerto Gaitán – Meta. On the contrary, Fr. Pablo GARCÍA, SMM, socius, begins his eighth year of collaboration at this stage. With his experience, he has been doing the induction to the novice master.
After the celebration of the Eucharist, there was a toast among all the attendees: priests, novices and laity. Novices of foreign nationality had the opportunity to captivate our laity with their language. There were no lack of words and songs in Portuguese, Creole and French, creating a pleasant and fraternal atmosphere.  May the joy and enthusiasm of this first day endure until the end of this stage.
May the prayers and supplications of the Montfortian communities in the different countries have from time to time the intention of praying for Vitor, Jean Marie and Diego Alexander so that they may be docile to the Holy Spirit and let the missionary that St. Louis-Marie de Montfort dreamed, be sculpted in their hearts: "What do I ask of you? Free men, slaves of your love and your will, men according to your heart." SA 7
Fr. Benigno Zorro CORREDOR, SMM