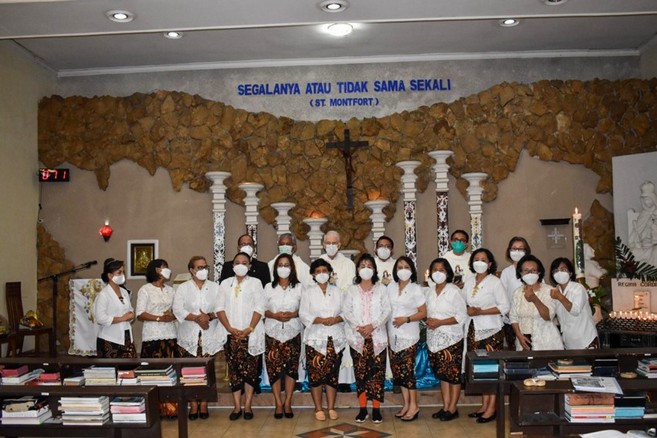 Ponsa Calls for Gratitude
MALANG, Indonesia - Thursday, April 7, 2022, was a rare moment and a historic day for all of us—the big Montfortian family. On this day, 14 of our brothers and sisters bravely, consciously, and humbly dedicated themselves to Jesus through Mary. Originally, there were only 7 people at PMRSH (AMQAH) Malang, namely Ignatius Royke Kamu, Marietty Veronika Dua Lembang, Fransisca Wijayanti, Wiwik Murniwati, Elisabeth Lucy S. Pasereng, Theresia Supriyatin and R.A Susiana Dirgarini Yuliastuti. The other seven came from AMQAH of Jakarta, Batch II, who had been mentored by Father Jeje via zoom. They are Maria Leonora Linawati, Anastasia Erlin Natalia, Maria Prapti, Juliaty Raharjo, Maria Theresia Dwi Ena Anjar Cahyanti, Alodia Theodora Dina Santoso, Maria Margaretha Ratih Puspa. They spread out in several cities: Sidoarjo, Surabaya, Bali, Solo, Semarang, and Tangerang.
This self-dedication ceremony was the culmination of their pilgrimage for approximately one year with the companion of PMRSH, namely Father Jeje, SMM for the Bandung and Jakarta area, and Father Lorens, SMM for the East Java region. This ceremony became the moment the newly dedicated members had been waiting for. This wait was a wait that is not in vain because it has resulted in abundant happiness and joy. Our brothers and sisters seemed to be very enthusiastic and happy to do this self-dedication. This graceful opportunity was a special joy for them. They were happy because they dedicated themselves as servants of Jesus in Mary not because of coercion from others, but dedication motivated by love. It is this love that prompts them to trust themselves completely in Jesus through His mother. This love is also the reason, their starting point or motivation, and the spirit that moves them to dedicate themselves.
The dedication ceremony was presided over by Father Wim Pieters, SMM. Exactly at 15:30 WIB, the brothers, who were members of the choir, began to sing Ave Maris Stella. Customarily, the participants first took an oath of allegiance in front of the scriptures. After the first stage, they marched into the front of the Montfort chapel to renew their baptismal vows in private. This self-dedication ceremony went safely and smoothly due to the hard work of Father Lorens, SMM, who faithfully trained the prospective members of PMRSH.
Not only that, this self-dedication ceremony was then celebrated together in the Holy Mass led by Father Wim, SMM. It was also attended by Father Lorens, Father Dwi and Father Frans. The celebration went smoothly, coupled with the melodious and solemn voices of the brothers who also enlivened this thanksgiving celebration. In very deep thought, Father Wim advised all those present, especially the newly dedicated PMRSH members to always be aware that self-dedication is a means that invites all of us every day to always renew ourselves and our baptismal promises to God. In addition, he also emphasized that our pilgrimage is not only at the level of self-dedication ceremonies.
Flood of Happiness
The expression of happiness is not enough to be buried and kept in the day. So, at the end of the Eucharistic Celebration, there were a series of emotions from the representatives of the new members, from Father Lorens, SMM as PMRSH companion for the East Java region, and from Father Dwi, SMM representing the Union. One of the new AMQAH members, Mrs. Wiwik Murniwati, expressed her gratitude to the SMM priests who had taken the time to share the spiritual wealth taught by St. Montfort. In addition, she also felt proud and happy because she had been allowed to solemnly dedicate herself to Jesus through the hands of Mary. A brief request from her who represented the other 13 participants was that they still needed the support and direction of the priests to continue to share the spiritual wealth of Saint Montfort with them.
From Father Lorens, one thing that is emphasized and very urgent is that AMQAH members must be aware that this self-dedication ceremony is a gift from God and not by our strength. This moment is the perfect time for God and it should be decorated with abundant gratitude and joy. Likewise, Father Dwi also emphasized two things that are no less important. First, self-dedication is a surrender of ourselves freely without coercion. Second, self-dedication is also an invitation to come back to see and renew yourself more perfectly every day continuously.
Bro. Rey NABAN, SMM