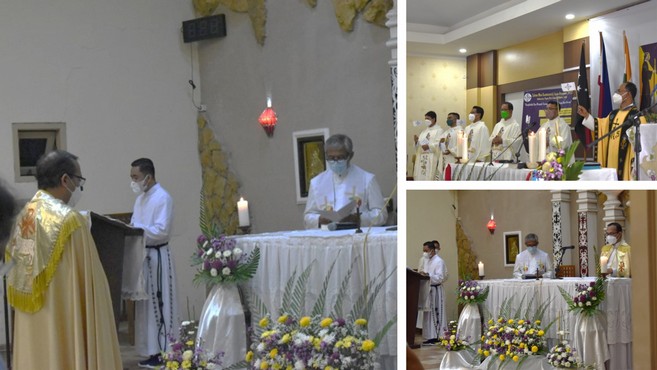 MALANG, Indonesia - It was on January 15, 2022 at 15.30 WIB when a light drizzle drenched the Montfort Seminary. Invited guests who are members of the Association of Mary Queen of All Hearts (AMQAH) began to arrive. The brothers and the sisters were ready to warmly welcome the guests. Guests were directed to the main entrance which has been used as a "photo gallery room" for the Montfortian missionary activities. There was a display of various documentations of activities, both from formation houses, mission houses, and parishes. Some of the documented activities were from categorical groups, especially AMQAH, Montfort Youth, and Sekami-Sekar. Beside photo galleries, there was also a special table where spiritual goods such as statues, rosaries, holy images, key chains, and "Rise and Shine" T-shirts were displayed for sale. The atmosphere became more intimate when many guests began to ask many questions about the seminary and the goods being sold. The brothers were eager to carry out their duties as “little guides”.
Afternoon Service
The afternoon service and launching ceremony of the Asia-Oceania Continental Mission Year Java Region began at 17.30 WIB. This service took place in the main chapel of the Montfort Seminary. On the official agenda, the opening service of the mission year and a whole series of other events were supposed to take place in the courtyard of the seminary's Cave of Mary. However, due to the unfavorable weather, the whole event took place indoors. The service was held in the chapel and the social gathering took place in the Van Kessel Hall.
The service was led by the Provincial of SMM Indonesia, Father Antonius TENSI, SMM. But ten minutes before it began, the liturgical section briefly explained about the program of the service. It was important because there were many “additional rites” according to the theme of the service, namely the launch of the Continental Mission Year of Asia and Oceania 2022. For example, the rehearsal of the theme song and brief introductions to entities in Asia and Oceania covering history, missions, the number of congregation members and the number of AMQAH members.
The service went on solemnly and smoothly. Many AMQAH members were present representing their respective sectors, such as from Jakarta, Bandung, Gunung Kidul, Solo, Semarang, Surabaya, and Malang. Many brothers were sitting outside the chapel besides the choir members and musicians. Not to forget, representatives from Montfort Youth also attended the service as a sign of their active participation in living the spirituality of Montfort. The service ended at 18.25 WIB, then continued with a friendly gathering in the recreation room.
Friendly Events
The friendly event was hosted by Fr. Aran, SMM and a mother from the Association of Mary Queen of All Hearts-Malang. In the event, a short video clip of the Superior General, Fr. Luiz Augusto STEFANI, SMM was shown which contained congratulatory remarks in entering the continental mission year. Another opportunity was also given to the Rector of the Montfort Seminary, Fr. Dwi WATUN, SMM to briefly share life about the Montfort Seminary. Father Dwi conveyed one important thing about the main purpose of the formation in this house of formation, namely to find the Wisdom who is none other than Jesus Christ himself. After that, it was followed by a group dinner and distribution of prizes especially to the brothers.
This is a little story that we share about the afternoon service of the launch of the Asia-Oceania Continental Mission Year 2022 for the Java region. Hopefully this sharing can give joy and ignites enthusiasm in carrying out all series of activities during this mission year. Regards, Rise and Shine.
Bro. Vincent Masut, SMM
Bro. Savio Cimi, SMM