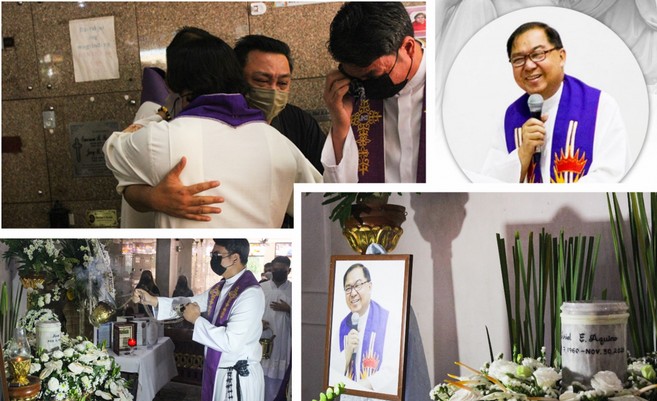 QUEZON CITY, Philippines - The Philippine Delegation of the Montfort Missionaries was in a state of deep sorrow due to the loss of their brother Rev. Fr. Ariel E. AQUINO, SMM, last November 30, 2021, due to Covid-19 infection and other health complications at San Juan Medical Center in San Juan City, Philippines.

The late Fr. Ariel was one of the pioneering Filipino Montfortian Priests who dedicated his life to the service of the Church and of God's people. He was one of the active Parish Priest in St. Louis- Marie Grignon de Montfort Chaplaincy in Dagupan and Sta. Teresita Parish in Makati. His bold missionary zeal led him to say "Yes" to the foreign missions he experienced in Columbia and Papua New Guinea. His availability to the needs of the Congregation was unique. His way of doing his work as part of the Delegation Council and Formation Team was an exemplar.

Fr. Ariel has lived his life full of life and joy. Many people know him as a generous, gentle, and loving person. As Montfortian Missionary, His love and trust in the Lord and devotion to the Blessed Mother are unmeasurable because he offered it to the Lord even in his sickness and pain.
On December 1 to 9, 2021, the Philippine Delegation of the Montfort Missionaries dedicated these dates for Fr. Ariel's vigil and wake Masses. His cremated remains were exposed first for a vigil inside the chapel of St. John the Baptist Church in San Juan, his hometown. It was reasonable for the family members and some friends to pay their last tribute to the deceased Montfortian. After three days, the remains were in the Montfort Missionaries' residence in Brgy. Mariana, Quezon City. Lastly, at Sta. Teresita Parish in Makati. On the evening of December 9, the parishioners of Sta. Teresita Parish organized a program wherein everyone witnessed some photos and videos of Fr. Ariel. The following day, December 10, 2021, a funeral Mass was presided over by Fr. Norwyn V. Baydo, SMM, the Philippine Delegation Superior. The Mass started at 10:00 A.M., followed by the burial, witnessed by the family, relatives, friends, the Montfortian Families, including the Daughters of Wisdom, and other representatives from different religious congregations who shared their last sympathy.

Rev. Fr. Ariel Enrico AQUINO, SMM, was born on February 9, 2021 in Pasig City. On May 31, 1988, he took his first profession at SMM Scholasticate House, Mariana, Quezon City. His Perpetual Profession of the Religious Vows was on March 25, 1994. He was ordained to the sacred order of the diaconate May 1, 1994. November 20, 1994, was his ordination to the priesthood.

"May we find true satisfaction in the missionary work we do, and may those whom we are serving see Jesus living day by day in us." –  +Fr. Ariel AQUINO, SMM