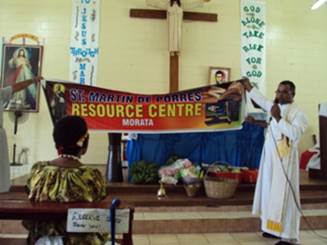 On April 28, 2013, feast of St. Louis-Marie de Montfort, we had the privilege of opening and blessing our first formation house in PNG, Morata.  Archbishop John Ribat, was the main celebrant. Present were the Montfortian Family- the Montfort Fathers and Brothers, the Brothers of Saint Gabriel, and the Daughters of Wisdom, along with many religious from the archdiocese of Port Moresby. The Archbishop during his homily said, “The church started and grew among the poor, and it is the poor that Jesus came to seek. The Montfort fathers chose to be among the poor settlers of Morata in our archdiocese and I am sure the Lord will help them to grow among them.” He added saying, “Montfort encouraged his followers to make the Cross their way of life. We pray that the Lord strengthen our two priests to carry the Cross in all forms here in Morata.”
It was a joyful event for the Montfort Missionaries. The parishioners of Morata were excited to see the new developments for which they had been praying for a long time. Dances and food added to the joyful atmosphere in the church grounds.
We thank the general administration for the encouragement and support towards this project and we pray that the Lord will guide us through the process. We ask all our confreres spread around the world to pray for us and for vocation to Montfortian religious life.