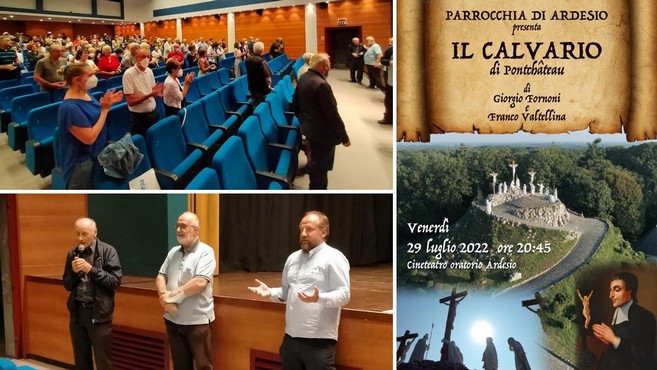 ARDESIO (BERGAMO), Italy - On July 29, 2022, journalist and reporter Giorgio FORNONI presented a documentary entitled “The Calvary of Pontchâteau”, in the parish theater of Ardesio in front of an audience of more than one hundred people.
This 42-minute video, mainly focused on the figure of St. Louis-Marie Grignion de Montfort and his great Calvary, was made by Giorgio FORNONI and his operator Franco VALTELLINA.
Known above all as a reporter who has told the wars in many areas of the world, Giorgio FORNONI has investigated a religious theme this time. It is a work that Giorgio FORNONI has created on the impulse of the Montfortians, to whom he has been linked for years by a relationship of friendship and collaboration.
“Father Santino BREMBILLA, SMM, now a missionary in Pontchâteau, France, and Father Giovanni BIGONI, SMM, a missionary originally from Ardesio, insisted so much that I carry out this work,” continued Fornoni. “Before accepting, I told them that I had to ask my operator and editor (Franco VALTELLINA). If he had been available to do the work for free, then I would have put myself on the line too. He said yes and so I started telling this story of faith and devotion.”
The video involved an intense research work, a collection of materials, and shooting in France. Also present in the evening was Fr. Giovanni BIGONI, SMM who took the floor to greet his parishioners and thank the author of this work.
Fr. Santino BREMBILLA, SMM