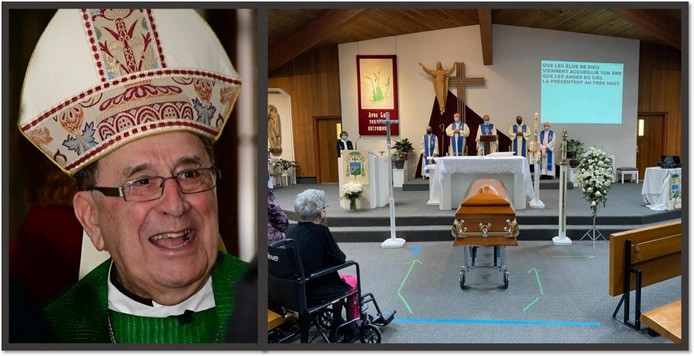 MONTRÉAL, Canada - Monsignor Deschamps was born on July 4, 1929, in Vanier, Ontario. He was ordained a priest in the Congregation of Montfort Missionaries on March 13, 1954. After studying Canon Law in Rome and Literature at the University of Montreal, he left for a mission in Papua New Guinea, newly founded by the Montfortains of Canada. In 1961, he was appointed Apostolic Prefect of this missionary region, then, on November 15, 1966, he became bishop of the new diocese of Daru-Kiunga. His consecration took place on January 21, 1967. He was the courageous pastor of this young Church until 1998. He then accepted the episcopal office in the diocese of Bereina until 2002. He then participated in the second and fourth session of the Vatican Council II. He was himself co-consecrator of three bishops: Mgr Gilles Côté, Mgr John Ribat and Mgr Paul Marchand. When he returned to Canada, he was in charge of the Canadian Mission Procure. In 2005, he took up residence at the presbytery of the parish of Our Lady of Lourdes in Vanier, Ontario. Following health problems, he moved to the LaSalle residence in Ste-Dorothée.
The episcopal motto of Archbishop Deschamps was “Omnia omnibus pastor”, inspired by a letter from Saint Paul: “I made myself everything to everyone to surely save some. And all this I do for the sake of the gospel” (1 Corinthians 9:22-23). Everyone will remember his inexhaustible good humor, his courageous optimism, his great love for the Church and his congregation.
His funeral was held at Our Lady of Lourdes, Ottawa on March 9, 2022, officiated by Msgr. Gilles Côté, bishop of the Daru-Kiunga diocese, who retired a few weeks ago. He was accompanied by the Apostolic Nuncio Mgr. Jurkovič, and several of his fellow priests.

A large number of people attended the celebration, including several Daughters of Wisdom and Brothers of St Gabriel.
Bro. Gilles PAQUETTE, SMM