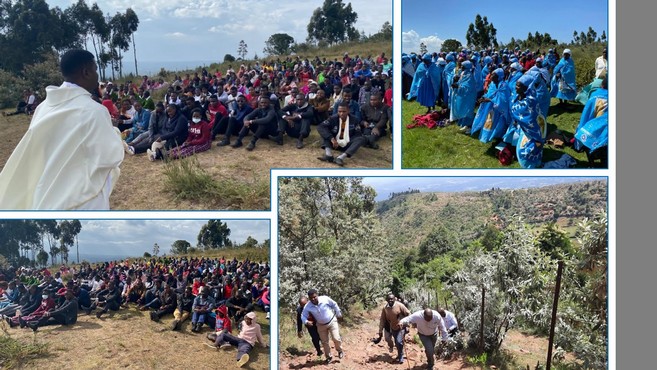 NGONG, Kenya – On Sunday, May 1, 2022, the superior of the entity of Africa Anglophone delegation, Fr. Paul MASHONGA, SMM, announced that another community in Kenya, aside from the scholasticate, was to be opened. The pioneers for this community would be Frs. Horrice MKANDAWIRE, SMM and Jacob OTIENO, SMM. Indeed, the two fathers arrived at Mulot parish where the bishop of Ngong diocese sent them.
Originally, the initial plan for the community in Ngong was to be a parish. However, the bishop proposed to the entity that, since the Company of Mary is well versed with the Marian spirituality, it was to be very meaningful if we run the shrine for this diocese. And so, the bishop sent the 2 confreres to one of the parishes to be helping as they wait for the building of some of the facilities at the shrine. Frs. Horrice and Jacob are now staying with two diocesan priests, as they await to build their own community and make their own Montfortian community. “We thank the generosity and warm welcome of Frs. John and Patrick of the diocese of Ngong”, Fr. Horrice said.
Despite the fact that the shrine might take some years to be completed, when the bishop identified and announced to the diocese one of the mountains to be the locality of the shrine called Mulot shrine, some Christians and groups from all corners of the diocese have begun already patronising the spiritual home. Our two confreres have had good directions to guide the pilgrims who come at the site. Our two confreres first received a group of around 200 members of the catholic women association, later on, almost 20 teachers who guide The Pontifical Mission Societies (PMS) children group from the deanery. Recently, on 23rd July, they received a group of almost 200 youths from all corners of the deanery too.
The new mission is proving fruitful and running the shrine will really benefit many souls for their salvation. The mountain where the shrine is, is very conducive for prayer with a lot of natural trees, the sound of the birds, fresh air, and its topography is of a plateau as it is flat on its whole top.
Though the Mulot shrine has received a lot of applause from the Christians as evidenced in their coming to reflect their spiritual life on the site, there is still a lot to be done. The most eminent thing to be done is to build some lavatories to accommodate people, sources of water both for drinking as well as to be used as holy water, a big cross to show our Montfortian identity like that of the Calvary of Pontchâteau among others.
Relying on Divine providence, we hope that slowly, the shrine will take its shape as we move towards putting our Montfortian mark in Ngong diocese, but most significantly to the whole church of Kenya.
Fr. Horrice MKANDAWIRE, SMM