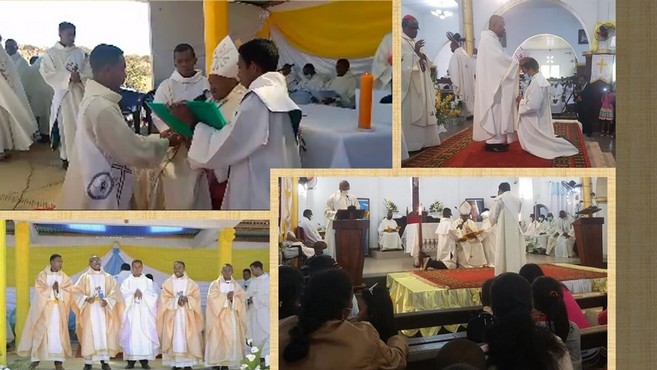 MADAGASCAR – In this month of August, the Vice-Province of Madagascar of the Montfort Missionaries experienced the joy of the priestly ordination of its two members.
The first was the ordination of RAMANANDRAIBE Solofoniaina Victor (Solofo) which took place on August 8, 2021, in Ambatomarina, during a solemn Mass presided over by H.E. Mgr. RAKOTONARIVO Fidélis, bishop of the diocese of Ambositra. Father Solofo was ordained here with four other deacons from this diocese.
We wish good luck to our dear Father Solofo in his new mission in Mananjary where he is sent by the Congregation. May the praises of Mary during the Visitation "The Mighty One has done great things for me" (Lk 1: 49), accompany him.
The second was the ordination of Samuel Henri NILAINA (Samuel) which took place on August 15, the Feast of the Assumption of Mary, at the parish church of Sainte Thérèse, Salazamay, Toamasina. The Mass was presided over by H.E. Bishop Désiré Cardinal TSARAHAZANA. Among the priests present, there was also the Vicar General of the diocese.
The motto of Father Samuel is: “Speak, Lord, for your servant is listening” (1 Sam 3: 9). We also wish Father Samuel good luck in his priestly service as a Montfortian religious, listening to what the Lord will say.
Finally, hearts that were filled with sadness following the death of Fr. Olivier Maire in Saint-Laurent-sur-Sèvre were comforted by the presence of these two new missionary priests, who assure us that the mission of the Congregation will continue in the Church and in the society. During these two ordinations, the members of the three Montfortian Congregations were present as a confirmation that the mission continues.
Bro. Olivier Nantenaina, SMM