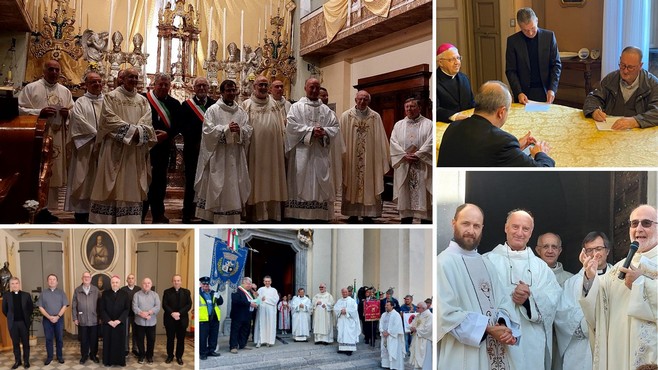 ITALY - The Superior General recently authorized the opening of two new communities for the Province of Italy. Following a long discernment and in response to wanting to "dare to risk for God and humanity", the Italian Province has in fact accepted to engage in the pastoral unit "Val del Riso" in the diocese of Bergamo and the sanctuary "Madonna di Caravaggio in Codogno”, in the diocese of Lodi. These two new foundations are placed in the spirit of the 350th anniversary of the birth of Montfort and the 75th anniversary of his canonization.
With regard to the Sanctuary of the “Madonna di Caravaggio” in Codogno, on September 26, an agreement was signed between the Bishop of Lodi, Mgr. Maurizio MALVESTITI, and the Provincial Superior Fr. Mario BELOTTI, SMM, for a period ad experimentum of three years. This agreement provides for the following mission:
The confreres Fr. Orazio ROSSI, SMM and Fr. Fabio LOCATELLI, SMM are involved in this new apostolic adventure.
September 17 marked the beginning of the transfer of responsibility from the “Val del Riso” pastoral unit to our Congregation. It was the Bishop of Bergamo, Mgr. Francesco BESCHI who consulted the Montfortians by giving them this mandate. The pastoral unit includes four parishes and a Marian shrine: St. Martin in Gorno, St. Mary Assunta in Oneta, St. Anthony the Great in Cantoni, St. Bartholomew Apostle in Chignolo and the “Madonna del Frassino” sanctuary. Here are the three objectives of this foundation, also in response to the expectations of the bishop:
Fr. Angelo EPIS, SMM (pastor), Fr. Aldo BOLIS, SMM (parochial vicar) and Fr. Francesco FERRARI Jr., SMM (collaborator) are assigned to this ministry.
In a Circular letter addressed to the confreres of the Province, the Superior, Fr. Mario BELOTTI thanked the five confreres who generously joined in these projects, wishing them all the pastoral good, supporting them with encouragement and prayers.
Fr. Marco PASINATO, SMM