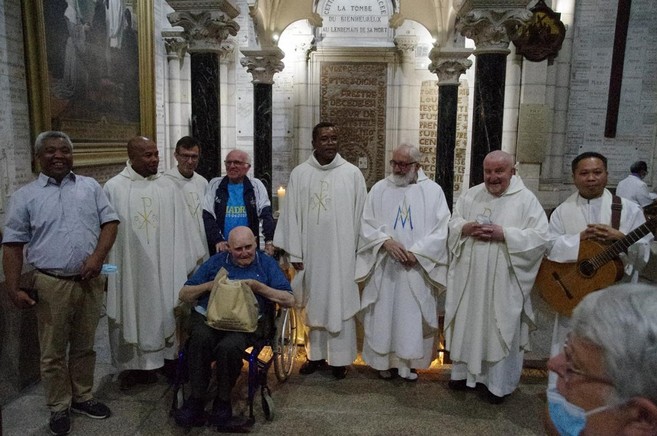 SAINT-LAURENT-SUR-SÈVRE, France - On September 8, 2021, the community of Saint-Laurent-sur-Sèvre had the joy of celebrating the 75 years of religious life of Fr. Joseph Guillouzic, SMM and the 25 years of religious life of Fr. Paulin Ramanandraibe, SMM.
At 11 a.m., around the tomb of the founders, a small community made up of a group of parishioners, several representatives of the three Montfortian religious families, and some friends of Father Paulin, gathered around the two confreres to celebrate the Eucharist. The Mass was presided over by Fr. Robert Chapotte, SMM, the current Provincial Superior. After the homily given by Fr. Paulin, Fr. Joseph and Fr. Paulin renewed their religious profession. The animation of the Mass was joyful with songs in French and Malagasy.
After the Mass, the feast continued with a fraternal lunch in the house of the Montfort Missionaries. The lunch was animated by dances and songs in several languages.
The community gave thanks to God for this moment of joy and to Fr. Joseph and Fr. Paulin for their testimony of life.
Fr. Francesco Ferrari, SMM