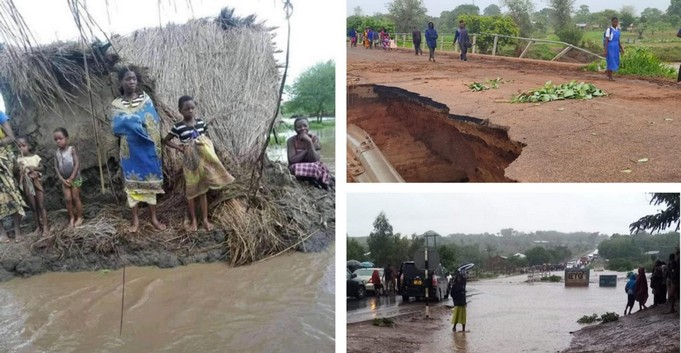 BLANTYRE, Malawi - It is beginning to surprise many Africans: how can Africa have such kind of things like floods forming as you have never seen before, heavy flooding, landslides, winds we have never seen such speeds! We commonly hear of such cyclones in America and some Asian countries. It is surprising to many indeed because the African continent is now experiencing it.

In Malawi, we experienced cyclone Idai in 2019 and now it is Ana. The tropical storm Ana, since it entered Malawi on 22nd January 2022, has brought heavy rains exceeding 250mm in a day and very strong winds exceeding 80km/hour in many areas of southern Malawi. The impact of the storm has been torrential rains, very strong winds, floods, and the falling of trees and power lines. A good number of roads that connect people have been rendered impassable and some completely washed away. The seriously affected districts are Nsanje, Chikwawa, Mulanje, Mangochi and Phalombe, with so many households displaced, and many people are seeking refuge in designated camps, churches, schools, and other public structures. Even though cyclone Ana has weakened since it hit Malawi from 22nd January onwards and has passed through Malawi, more rains are still continuing to cause more flooding hence the need for more support.

The most unfortunate thing with the cyclones that Africa is now experiencing is that most of the infrastructures were not built in a way that they can withstand the storm. Even the Malawian government is alarmed by the magnitude of the damage which prompted the president on 26th January, to declare heavily hit districts disaster places. The government has also issued an analysis of the damage which is available. Following the declaration by the president, the Episcopal Conference of Malawi (ECM), on 27th January 2022, sent a communique to stakeholders and Christians of goodwill appealing for support for those heavily affected districts. Similarly, CARITAS Malawi and Catholic Development Commission in Malawi (CADECOM) released an assessment of the areas heavily hit by cyclones Ana and casualties as seen on their report dated 26th January 2022.

Impact of the storm
Cyclone Ana has seriously caused alarming damages: Blowing off house’s roofs, loss of livestock, collapsing of houses and toilets, cut off roads network, damages of bridges, culverts and other road structures, damage of public and private infrastructure: schools, health facilities, churches. It is sad that over 30 people are confirmed to have died. But the figures can be more since it is becoming difficult to reach to the places where people live since the roads have become impassable. Some dead bodies have been washed away and soiled.
Response interventions
The Malawi government and other organizations are at the forefront doing several commendable works:

What is Needed urgently

The Montfort Missionaries working in the Anglophone Africa General Delegation joins the Episcopal Conference of Malawi (ECM), CADECOM, Caritas, Malawi Government, and other stakeholders to appeal for support towards the victims of Cyclone Ana in any way possible, materially and financially.  Your support will touch their lives significantly.
Fr. Lonely Paul MASHONGA, SMM
Superior Delegate of Montfort Missionaries, Anglophone Africa