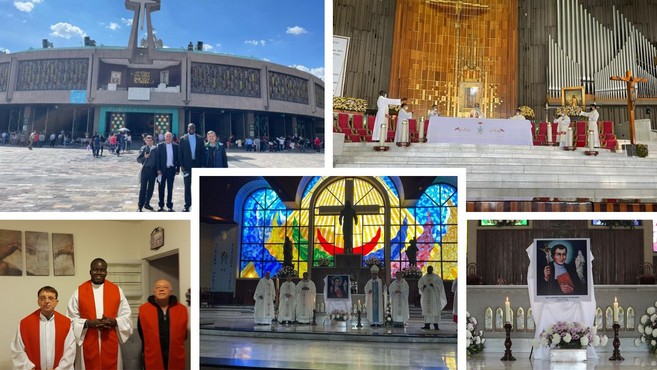 ECATEPEC, Mexico - On August 15, the Solemnity of the Assumption of the Blessed Virgin Mary into Heaven, the Missionaries of the Company of Mary (Montfort Missionaries) officially received the kiss of peace from the Diocese of Ecatepec, Mexico, represented by Bishop Oscar Roberto Dominguez Couttolenc and the faithful who, for this welcoming celebration, participated in the Eucharist.
The three missionaries who make up the new community were present at the 11 o'clock celebration at the Cathedral of the Sacred Heart of Jesus: Fr. José Luis Sandoval, SMM from the Province of Colombia, Fr. Joseph Love, SMM from the Province of Haiti and Father Francesco Castria, SMM, an Italian from the General Delegation of Peru-Brazil. Also present was Fr. Jorge Enrique Gonzales, SMM, the Provincial of Colombia who represented the Superior General, Fr. Luiz Augusto Stefani, SMM who could not be with the team. Near the altar, the image of Saint Louis-Marie de Montfort, preferred by Bishop Roberto, was enthroned.
Since the arrival of the team, the Bishop of Ecatepec has had a very paternal attitude towards them and he manifested it again at the beginning of the celebration, when he recalled the fifty years of priestly life of Father José Luis on August 22. In his homily, the bishop affirmed that the presence of the Montfort Missionaries in his diocese was a fruit of Providence. Four years ago, the encounter was providential, and not planned, during the meeting of the Mexican Episcopal Conference.
He also recalled the tragic death of the Montfort Father, Olivier Maire, "killed by the man to whom he had done good" and implored his intercession for the new mission on Mexican land.
Also present in the Eucharistic celebration were Mrs. Margarita Flores, the representative of the Montfortian consecrated persons in Mexico from the Diocese of Tampico, and Alexandra Salas, a Peruvian lady who was a friend of the first Montfort Missionaries to arrive in Peru.
After the celebration, they went to the bishop's residence for lunch. In the afternoon, they headed to the Basilica of Our Lady of Guadalupe where the "tilma" (mantle, outer garment) of Juan Diego is kept, on which is engraved the image that millions of pilgrims venerate. At the basilica, they celebrated with Bishop Roberto. He entrusted the new Montfortian mission to the Virgin Mary: they could not be placed in better hands.
About Ecatepec: It is a town located between 2,200 and 3,000 meters above sea level and has a population of around three million. It is one of the one hundred and twenty-five municipalities that make up the region of the capital of Mexico.
The Diocese of Ecatepec was founded by Saint John Paul II in 1995 and is made up of fourteen deaneries. The Montfort Missionaries will have their mission in deanery number three, in one of its eight parishes, that of Saint Martin de Porres.
On Sunday, August 22, Monsignor Roberto officially handed over the parish of the Peruvian saint, Saint Martin de Porres, into the hands of the three Montfort Missionaries. Many faithful gathered in the church who awaited them, while observing social distancing due to the pandemic. The crowd welcomed them with festive hymns, to the Mexican rhythm; many white and yellow balloons swayed accompanying the music. The entrance procession was very lively. They were passing through a new community that the Lord had given them as a gift and at the same time, they themselves are a gift to the community of Saint Martin de Porres.
In his homily, commenting on chapter 6 of the Evangelist John, Monsignor Roberto insisted on the importance of knowing how to recognize the presence of Christ in our lives and in the Eucharist. And to the priests who will accompany the community of Saint Martin de Porres, he invited them to be examples in Eucharistic adoration by celebrating the Holy Eucharist with dignity and by carefully preparing their homilies. Much more, he invited them to be the figure of Jesus Christ through their own life. In a very special way, he addressed this request to the parish priest, Father Francesco. Then, the bishop presided over the rite of entry of the new parish priest with the solemn profession of faith, the renewal of priestly promises and the handing over of the Gospel, the keys of the tabernacle, the purple stole of the sacrament of reconciliation, the sacred oils and the records of the sacraments.
Before the final blessing, the bishop gave the floor to Father Jorge Enrique, the Provincial of Colombia, who presented the Montfortian Spirituality through the words of their Founder in his “Burning Prayer”, asking for missionaries: “What, then, am I asking for? Liberos, men who are free”. The Mass ended with a hymn to Father José Luis Sandoval who began this new mission on the day of his fiftieth anniversary of priestly life.
After the Mass, it was not possible to organize a celebration due to the pandemic but the community expressed their affection through the donation of baskets filled with fruits and food.
May the intercession of Our Lady of Guadalupe and of our holy Founder, Saint Louis-Marie de Montfort, open our apostolic mission.
Missionary Team of the Montfortians in Mexico