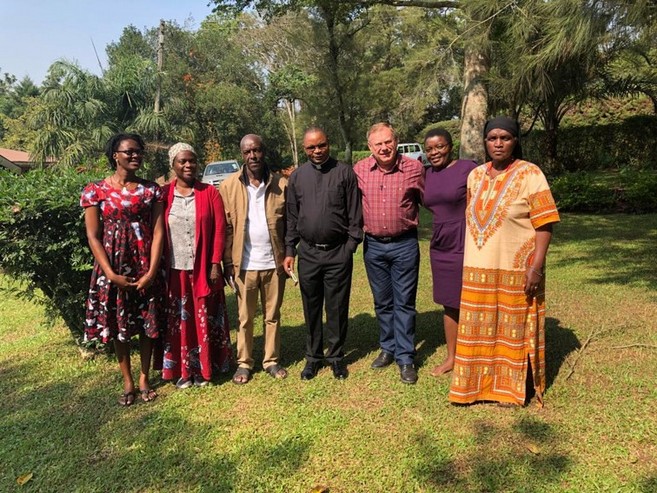 UGANDA - This year 2021, the Montfortian Lay Associates (Mary Queen of All Hearts) in Uganda were privileged to meet the Superior General of the Montfort Missionaries, Fr. Luiz Augusto Stefani, SMM and his Councillor for Africa and Madagascar, Fr. Felix Mabvuto Phiri, SMM together with the representative of the General Delegation of Anglophone Africa, Fr. Jacob Ombidi Otieno, SMM who came for the Continental Mission Year for Africa and Madagascar.  Their visit was to participate in the life, ministry and mission of the members of the Montfort Missionaries in Uganda.
Sunday, the 10th of October 2021, marked the summit of the visit and in the celebration of the Holy Mass, the Novitiate was launched and reopened. On this same day, the Montfortian Lay Associates made a milestone of meeting the Superior General and his Councillor.
Members were delighted to be accorded audience by Fr. General and during the meeting, they discussed on the background of True Devotion to Mary in Uganda. The lay associates shared their humble beginning as an apostolate.
The work of spreading the True Devotion to Mary as taught by St. Louis-Marie de Montfort in Uganda was started in 2014 by two Portuguese ladies, namely Isabella and Paula Duncan, after they had obtained the proper ecclesiastical approval and also contacted with the Montfort Fathers in Mbarara. Initially, the main teacher of this devotion in Uganda was Isabella and was assisted by Paula. Isabella made the PowerPoint slides out of the True Devotion to Mary book, which are still in use to this day (with minimal modifications).
In 2015, Isabella left Uganda and endorsed the work in the hands of Paula who carried it on with great zeal and love. Paula carried out consecrations in various parishes that includes Christ the King-Kampala, Mbarara, St. Augustine-Seeta; institutions such as Makerere University Business School, Kyambogo University and Nsambya girls’ school. She endeavored to ensure that members were able to access both the True Devotion books and the 33-day Consecration prayer books, often sacrificing her own resources to import the books to Uganda, and selling them at zero profit. She made the chains and bought a beautiful image of Our Lady of Fatima which she used during the consecrations.
In 2016, Paula had to return to Portugal. Providence placed in her hands a team of young and energetic devotees to whom she handed over the work, under the leadership of the Montfort Fathers in a meeting held on 20th January 2016 at Christ the King Parish-Kampala. In attendance was also the then Bro. Ronald Musinguzi, SMM (now a Montfortian priest) who represented the Montfort Fathers.
The team Paula left behind was headed by Mugoya Arthur (Chairperson), Nyangweso Margaret (Vice Chairperson), Ayebare Maria (Secretary), Kibaate Francis (Main teacher) and Kiwanuka Andrew (second teacher). The teachers were later joined by Agaba Denis. To date, the consecrated members are more than 500 including priests from different parts of the country.
The Lay Associates appreciated the Montfort Fathers, their spiritual directors, for taking care of them especially through meetings, seminars, recollections and retreats. Among those who met the Superior General were Ms. Katherine Nabyonga, Mr. Deo Nkuzingoma, Ms. Maria Ayebare, Ms. Paskazia Rubaramira and Ms. Stella Maris Kabasomi.
The Lay Associates further explained how they spread the apostolate in the different parishes, universities and schools. The team of various coordinators from different parishes worked hand in hand to ensure that the work left by Paula moves on. Under Our Lady’s patronage, the team was able to gain acceptance in various parishes to spread the devotion to Mary. Some of these parishes include Christ the King-Kampala, Our Lady of Mt. Carmel-Kansanga, St. Matia Mulumba-Old Kampala, St. James-Biina, Namiryango Parish, Bweyogerere Parish and also institutions like Makerere University, MUBS and Kyambogo University. The team was also able to hold a number of successful get-togethers in St. Matia Mulumba Parish for all the consecrated. The first get-together was on 28th April 2017 where over 200 members attended and was facilitated by the Montfort Fathers, Fr. Steve (the then brother), and Fr. Ronald.
During the meeting, the Superior General was happy that the Lay Associates are organized and are in touch and in collaboration with the Montfort Fathers. He told the members that the journey they had made was an important one as far as Montfortian spirituality is concerned. About the documentation of the church, he told them that movements of Lay Associates should move in line with what the church wants, thus supported them on their move to write a letter to the Episcopal Conference of Uganda.
He said that the consecrated are not consecrated for themselves but they are there for the service of the church and live by their baptismal vows. He explained to them that the Association of Mary Queen of All Hearts should be rooted in the parishes where they are present and their presence should be felt, thus the importance of having a data base registry for consecrated members. He also explained that it was important to officially appoint a National Director of Mary Queen of All Hearts in Uganda.
The Superior General revealed that the legionaries’ way of life is close to Montfortians. The spirituality of the Legion of Mary is more of Saint Montfort. He then informed them about the Continental Mission Year for Africa and Madagascar which is to help integrate the laity in following the spirituality of St. Louis-Marie de Montfort.
Lastly, the Superior General urged the members present that their meetings should not stop only at the national level but must also reach the international level so that they can integrate with the laity from different countries and share ways of working out on our spirituality. The Superior General and his council were pleased to see and meet the members and thanked God that they were in existence and strong.
Ms. Maria Ayebare