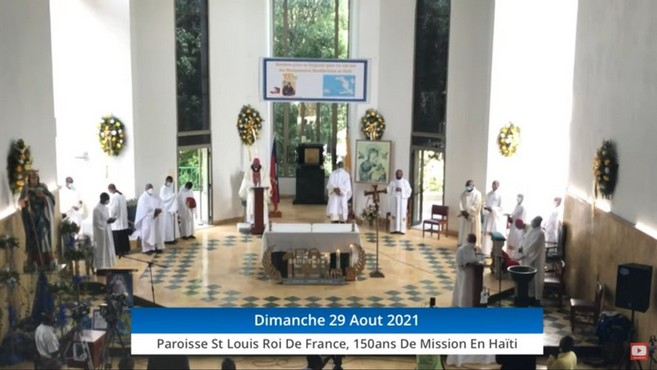 PORT-AU-PRINCE, Haiti - On Sunday, August 29, 2021, at the Church of Saint Louis, King of France in Turgeau, the Montfort Missionaries celebrated the solemn Mass of the jubilee of the 150 years their presence in Haiti. It was on August 30, 1871 when the first French Montfort Missionaries arrived in Haiti and were welcomed by the then Archbishop of Port-au-Prince, Mgr. Guilloux. They were Fathers Ruppin (64 years old), Boulanger (44 years old) and Henri (38 years old). It was a great manifestation of joy in Port-au-Prince.
150 years later, the Montfort Missionaries of the Province of Haiti, with the Archbishop of Port-au-Prince, celebrated their jubilee of 150 years of presence in Haiti.
They were grateful to the Lord for His love and fidelity during these 150 years. They expressed their heartfelt thanks to Mgr. Frantz Colimon who agreed to pass the torch to Brother Ceryl Saint-Jean, the youngest Montfortian in the scholasticate in Port-au-Prince.
Father Luiz Augusto Stefani, SMM in his letter to the confreres of the Province of Haiti, on the occasion of this jubilee, made the link between the first missionary presence of Montfort Missionaries outside France in 1871 and the new foundation which has just been established in Mexico in 2021. Now, 150 years later, Father Love Joseph, SMM who is a Montfort Missionary from the Province of Haiti, is in turn one of the first missionaries of this new Mexican foundation.
The Province of Haiti is aware of its great responsibility in this area: to make its missionaries available for the new establishments of the congregation.
Fr. Jean Jacques Saint-Louis, SMM
[Video 1]  [Video 2]