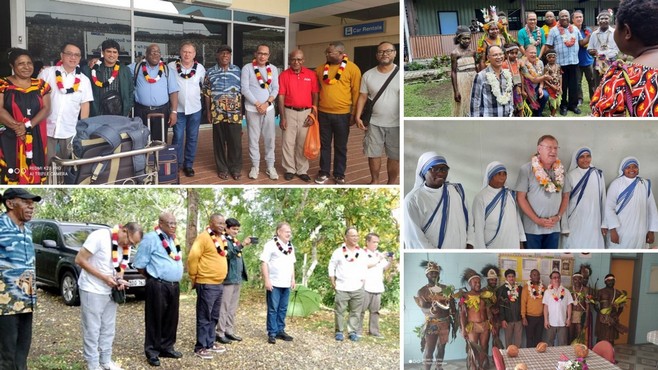 PORT MORESBY, PNG - On Friday, December 2, 2022, the confreres at the Montfortian Formation House of Bomana, and several parishioners and confreres at the Saint Martin de Porres Parish in Morata, all in Port Moresby, got up early and got busy to organize everything to welcome a Montfortian Delegation that landed at the airport of the capital city of Papua New Guinea. There was the Assistant General, Fr. Wismick JEAN-CHARLES, SMM who came from Rome and Fr. Shibi, SMM (Councillor, representing Fr. Peter MASCARENHAS, SMM, the Vice-Provincial) who came from Bangalore. They arrived early in the morning, before 6am.
They were joined by a group that departed from Manila: The Superior General, Rev. Fr. Luiz Augusto STEFANI, SMM with his councilors, Fr. Felix Mabvuto PHIRI, SMM, and Fr. Arnold SUHARDI, SMM; Fr. Norwyn V. BAYDO, SMM, the Delegation Superior in the Philippines, and Fr. Antonius TENSI, SMM, the Provincial Superior of Indonesia. They arrived before 8 am. Fr. Balaswamy KATA, SMM, General Bursar, will be the last to arrive, departing from Manila on December 8, 2022, and arriving in this country the day after.
The presence of the delegation team from the General Administration and Superiors from Asia is meant to take part in the Closing Events of the Continental Mission Year (CMY) of Asia and Oceania here as well as to get to know this entity better which will soon establish its own Novitiate with three novice candidates.
The Montfort Missionaries are present in this country since 1959. Today, this General Delegation has 13 priests and 1 bishop. They are missionaries who come from various entities: there are 5 confreres from India, 7 Confreres from Indonesia, and 1 Confrere from the Philippines.
Today, this General Delegation has 1 aspirant, 5 postulants; 2 scholastics of temporary vows who come from the General Delegation of Francophone Africa. This entity has more than 32 members of the Montfortian Associates.
The activities during this visit are well prepared by the confreres here under the coordination of Fr. Aloisius BANGGUR, SMM, the Superior of this (PNG) General Delegation. The aim is to deepen and strengthen mutual knowledge and cooperation between Montfortian entities in the region.
On December 3-6, the visitors have the honor of being welcomed by Bishop Rozario MENEZES, SMM, Bishop of Lae Diocese, and Fr. Vinod de Mello, Parish Priest of St. Michael in this town of Lae with his Parishioners. Several events have been prepared during these days of togetherness in Lae, including a «Montfortian Meeting» to discuss how missionary collaboration can be built in this Diocese.
On December 7-12, the visitors will be divided into two groups: some will go to Daru (Frs. Wismick, Felix, Shibi), Fr. Bala will join this group, some will go to Kiunga (Frs. Luizinho, Arnold, Anton and Norwyn). In each place programs have been prepared by the confreres there. After that, these visitors will return to Port Moresby.
On December 14, they are scheduled to meet Cardinal John Ribat, Archbishop of Port Moresby and visit the Community of the Brothers of Saint Gabriel and the Daughters of Wisdom.
On December 15, the Cardinal will bless the Montfortian Formation House in Bomana which is also known as the «Montfort House of Prayer».
On December 16 and 17, there will be an assembly of the PNG General Delegation. Many themes have been prepared to be discussed together. This assembly will be followed by an Evaluation of the Implementation of CMY of Asia and Oceania.
All these events will conclude on Sunday, 18 December with a CMY Closing Mass in the Parish of Morata, presided over by Bishop Rozario SMM.
At first glance it seems that the citizens of this country are in an extraordinary struggle for the improvement of their economy. The Church is challenged to be prophetic amid the existing situation. The Montfort Missionaries are walking in this direction with courage and hope!
Dolaa DHANUSH
Port Moresby