×
Go to content
Montfort News
Published by Montfort Communications in Rome · 20 May 2022
Tags: NU, GEN, 854
[FR]  [ES]
ROME, Italy - Father General gave the opening remarks on the theme “Dare to take risks for God and humanity: our creative fidelity”. Among other things, he highlighted two major tasks for the EGC's 4-day 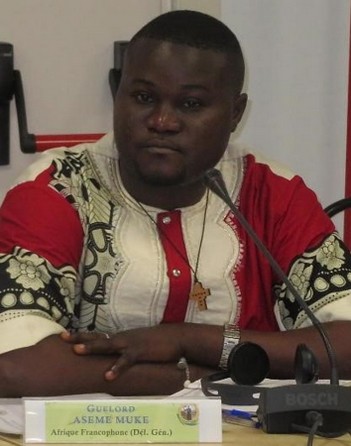 conference. The first part on practical questions of the life of the Entities and the second part about the preparation of the General Chapter 2023. Fr. Jailos Mpina SMM, on May 19, 2022, had an interview with Fr. ASEME Muke Louis-Guelord, SMM, the Regional Superior/Delegate of Francophone Africa and the youngest participant of the EGC 2022. He was born on 15th May 1985 and made his Perpetual Profession on 26th November 2017. His priestly ordination was on 12th August 2018.
How is the Extraordinary General Council Conference going on so far?
A/ The conference is going on well, in an atmosphere of brotherhood and peace. I was touched by the way in which the various speakers felt free to present their points of view despite the differences of ideas, etc. The Very Reverend Father Luizinho, the Superior General, is very attentive to the various interventions and does not hesitate to fix minds to seek the best resolution concerning this or the other point relating to the next General Chapter.
You are the youngest participant in this CGE as Regional Superior/Delegate of Francophone Africa, are you happy?
R/ Yes, I am very happy to participate in the Extraordinary General Council. This is my first time participating in a worldwide Congregational event such as this. I must admit that I take listening as a priority but also, I feel comfortable contributing if necessary at this or the other point. I am happy to have participated in this EGC (Extraordinary General Council 2022) and I am, in one way or another, prepared for what will be experienced during the next General Chapter. In the proposed theme, in particular, “Dare to take risks for God and humanity: Our Creative Fidelity”; I feel in a context and a strong invitation to openness to divine providence. On our own, we will never be able to understand everything and plan everything, sometimes we have to accept the “unplanned, unprogrammed” that happens to us; but all this in an atmosphere of prayer and total trust in God.
How do you represent the needs and the cries of the entities in Africa and also in Europe where many properties are being sold and the number of confreres is reducing drastically?
A/ This reality was, in my humble opinion, foreseeable a number of years ago. It is not today that we have begun to speak of a crisis or, better, a drought of vocations in Europe, to name only this continent. But the most important thing for me is to look at each other as a Congregation, to look at each other as a body, and to support each other, as much as possible. We must not close ourselves in to say that the business of Europe only concerns Europeans and vice versa; nope. We must understand the signs of the times, and work, however little, to bear witness to what Montfort “A Company” wanted. This Company terminology could, in my humble opinion, be considered a central theme during a general meeting, why not during a General Chapter? That the Entities which are “strong” materially or financially support those which are less strong; and those that are “strong” in personnel or numbers support those that are less strong in personnel. This is what I can consider as a prophetic reading of the signs of the times. We are a Company, a Congregation, yes, a battalion; let's not lose sight of it. All Is Grace, Infinite. Thanks to the God of Challenges.
Montfort Communications