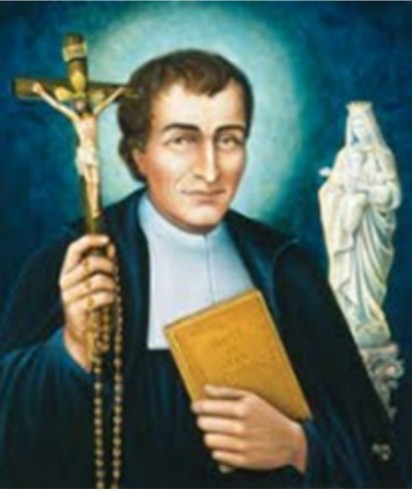 anniversary of the Birth of this Saint Founder of the Three Congregations (Daughters of Wisdom, Brothers of Saint Gabriel and Montfort Missionaries). Many secular and lay Institutes live from his spirituality.
This great missionary and spiritual master, originally from Montfort-sur-Meu, is the Patron Saint of the Central Parish of the Deanery of Brocéliande.
The celebration of the 350th anniversary of his birth will last throughout the jubilee year, allowing, on one hand, to give thanks to the Lord and on the other hand to get to know Father de Montfort better. In fact, the slogan of the jubilee sounds like this: Father de Montfort, who are you really?
The opening Mass of the Jubilee will be celebrated on Sunday, 20th February 2022 at 10.30 Am at Montfort-sur-Meu.  It will be presided over by His Eminence Philippe Cardinal BARBARIN.
The closing of the Jubilee will take place on Sunday, 29th January 2023, at 10.30 A.M., in the same Church of Montfort-sur-Meu.  The closing Mass will be presided over by Most Reverend Pierre D'ORNELLAS, the Archbishop of Rennes, Dol and Saint Malo.
During the Jubilee Year, several initiatives will be on the program which is prepared by a Jubilee Committee in order to achieve two objectives (to give thanks to God and to get to know better this Marian Saint). The program includes the following initiatives:
As time goes on, these initiatives and activities will be placed on the calendar and published for everyone. We thank God for this time of grace that he gives us.  He has placed in our lives this Holy "God-fearing" to accompany us in following Christ and being faithful to him. With the Virgin Mary, we sing "Magnificat" for these marvels. May Saint Louis-Marie de Montfort and Blessed Marie-Louise of Jesus look down from heaven on the vines which they planted and pray to the Lord to bless them abundantly and make them bear fruit for the glory of God Alone.
Fr. Jean Marie Helpa RAKOTONDRAVAO, SMM