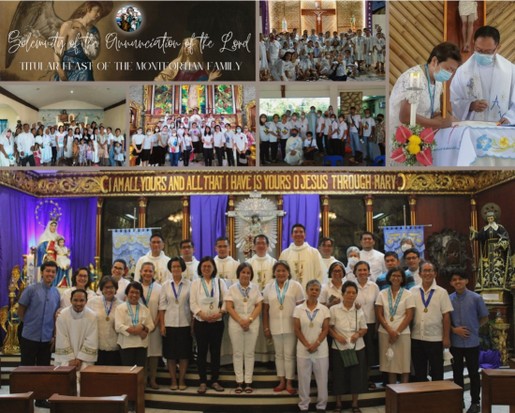 QUEZON CITY, Philippines - What distinguishes delightful spiritualities from one another is that individuals delve too deeply into Christ's mystery to have an all-encompassing perspective on their vital components that outweighs the inadvertent attributes depicting a specific event or cultural milieu. This has become plausible of Montfort's spirituality, which is entrenched mainly in the supreme mystery of Incarnation. Hence, it proves adequate for the interconnection of concepts emphasized in certain places and situations without losing their rich teaching. Inspired with the most profound awe and wonder to the mystery of Incarnation, the Montfortian Family uttered their renewal of commitment and consecration to Jesus through the hands of Mary in the ways of St. Louis-Marie de Montfort last March 25, 2022, at the chapel of Mary, Queen of All Hearts, Sct. Madriñan, Quezon City.
The celebration of the Holy Eucharist started at 5:00 P.M. It was presided over by Rev. Fr. Norwyn BAYDO, SMM, the Delegation Superior of the SMM Philippines. Concelebrating with him were his Council Members, Rev. Fr. Federick YUMANG, SMM, and Rev. Fr. Sherwin NUÑES, SMM, and other Montfortian Priests. The Daughters of Wisdom, AMQAH members, and TTJers were also present in the celebration as it is the Montfortian Family's titular feast. The Monfort brothers of San Gabriel were also united in spirit.
Highlight in the celebration was the renewal of commitment and consecration to Jesus through Mary. A good number of participants joined and have renewed their commitment and consecration. Before the celebration of the Holy Eucharist, the AMQAH members did their renewal of commitment. The renewal of consecration took place after the homily. At this point, united as one Montfortian Family, the Montfortian Priests, Montfortian Scholastics, Daughters of Wisdom, AMQAH members, TTJers, and the lay faithful renewed their commitment to Jesus through Mary in the teachings of St. Louis-Marie de Montfort. This solemn act was also done in various Montfortian mission areas in the Philippines, specifically in Brgy. Minglanilla and Brgy. Kinatarcan in Cebu City, in Sta. Teresita Parish in Brgy. West Rembo, Makati City, and in St. Joseph Chapel in Brgy. Salisay, Dagupan City, Pangasinan.
Rev. Fr. Sherwin NUÑEZ, SMM, was the homilist. In his sermon, he reminded everyone that Jesus' Incarnation is the center of the Montfortian Spirituality. He challenged everyone to Incarnate Jesus in our daily lives, especially in these trying times. He also acknowledged the significant role of Mary in the Incarnation and the reign of Jesus in everyone's life. He stated that it is through Mary that Jesus came into the world, and it is through her that Jesus will reign in the world. It was a grace-filled experience for everyone, especially those who renewed their consecration and confirmed that they are children of God.
Before the final blessing, Rev. Fr. Federick Yumang, SMM gave a short message to everyone expressing his gratitude to God and to everyone who selflessly joined the celebration. After the Holy Eucharist, it was followed by group picture taking and simple agape.
Bro. Samuel GONZALES, SMM