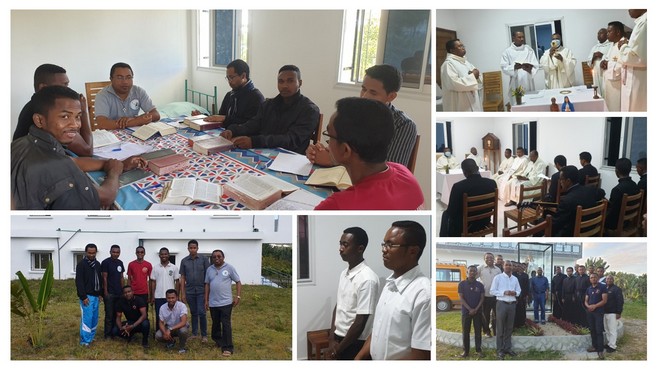 ANALAMALOTRA, Madagascar - At the beginning of September, there were two important events. Firstly, after going through the three-year philosophy, two young postulants prepared themselves by having a retreat as they begin their novitiate formation on September 7, 2022.
Secondly, in view of the renewal of their vows, 7 scholastics went to Analamalotra, Tamatave to spend a week of retreat. The retreat was preached by Father Joël (Montfortian) who accompanied them with the theme: “MEET CHRIST AND TELL HIM: REMAIN WITH US” Jn 24, 29-30.
In a calm environment, they were able to meet the Lord through prayer, common life, and accompanied by the Blessed Virgin. On September 8, 2022, the feast of the Nativity of the Virgin Mary, the 7 scholastics renewed their religious vows in the presence of the Superior of the Vice-Province of Madagascar, Father Bruno RANDRIANASOLO KIKY, SMM as representative of the Superior General, Fr. Luiz Augusto STEFANI, SMM.
These two events took place at the novitiate community in Analamalotra. During his sharing, Father Provincial mentioned the perseverance in their adherence to Christ through the writings of their founder. A few points were mentioned in relation to the Novitiate school such as school of self-sacrifice, fraternity, formation in conscience, maturity of choice, faith, etc. All these help them to keep their fidelity to God who calls them.
They were truly thankful to the Lord for all the graces He grants upon them. Good training.
To Jesus Through Mary.
Bro. Joseph Victor RATAFITANIAINA, SMM