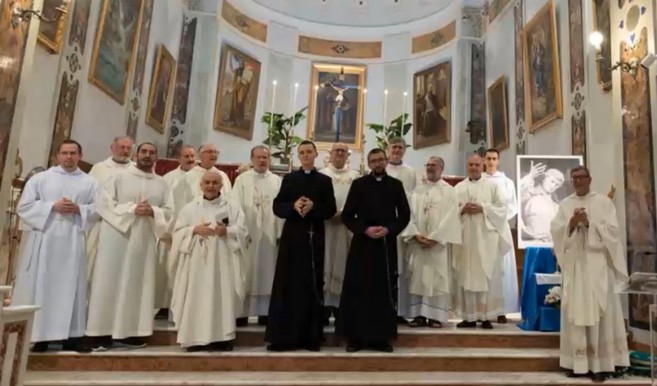 SANTERAMO, Italy - On Sunday, September 11, 2022, our religious family had the joy of welcoming Paweł and Wojciech, two young Poles who made their first religious vows at the end of their year of novitiate.
The evening before, after vespers, Paweł and Wojciech renewed their consecration to Jesus Christ through the hands of Mary. In his speech, the Provincial Superior, Fr. Mario BELOTTI, SMM explained to those present that both religious vows and ordinations to the diaconate or to the priesthood are deeply rooted in Baptism, whose ultimate goal is to lead to the continuation of Christ. He recalled that "The more we lose sight of Baptism in our life - especially as religious and priests - the more we drift away from the spirit of Jesus. Then, we can become good servants...but we will never be people in the image of Christ and therefore, the less we will be able to inspire the brothers and sisters entrusted to our spiritual and pastoral care”. Consecrating oneself to Jesus Christ through the hands of Mary means precisely keeping "alive", fully live one's baptism, to conform and "reproduce" Jesus Christ in our lives through total abandonment in Mary, Forma Dei, Mold of God. Paweł and Wojciech, before manifesting with their lips the decision to offer themselves without reserve to Jesus Christ by the gesture of infusing a little incense in the brazier placed in front of the altar.
The next day, during the solemn Eucharist celebrated in the parish church of Santeramo in Colle, Paweł and Wojciech made their first profession. The Provincial Superior presided over the liturgy, surrounded by many confreres, including the General Councilor, Fr. Marco PASINATO, SMM. Among those present were the parents of the newly professed from Poland, many friends from the novitiate community and a large group from the members of the Association of Mary Queen of All Hearts of Trinitapoli. The voices of the parish choir accompanied the different moments of the celebration and contributed to creating a prayerful atmosphere.
In his homily, Fr. Mario BELOTTI, commenting on the Gospel (cf. Lk 8:19-21), illustrated the way to follow to respond to the desire to go to Jesus and to become his family: it is the Word of God, heard and put into practice, which makes us a mother and a brother of Jesus. Turning to Mary, she’ll suggest to Paweł and Wojciech the steps to follow so that the Word of God bears fruit in their lives: a constant openness to the Word of God; grow in joy and bliss; the perseverance that comes from prayer, from meditation, from the sincere practice of Montfortian spirituality and from living a sincere feeling of belonging and fraternity.
After the homily, Paweł and Wojciech read the formula for first profession, written with their own hands, which they then placed at the altar, thus uniting the offering of their lives in chastity, poverty and obedience to the sacrifice of Christ. They therefore received the religious habit, the Constitutions of the Company of Mary and the rosary. The celebration ended with the signing of the newly professed.
Everyone gathered in the community garden to share the joy of this Feast with Paweł and Wojciech. The day ended with the prayer of the Rosary, Vespers and the Eucharistic blessing.
A few months after his priestly ordination, Saint Louis-Marie de Montfort wrote to his spiritual director: "I have a great desire to make Our Lord and His Blessed Mother loved, to go, in a poor and simple way, to teach catechism to the poor of the countryside and to urge sinners to devotion to the Blessed Virgin... I do not feel worthy of this noble task, but, given the needs of the Church, I cannot help asking continually and with groans, a small and poor Company of good priests they fulfill, under the banner and protection of the Most Holy Virgin”. Truly, the first profession of Paweł and Wojciech is the answer to the desire of Saint Louis-Marie. May the Lord bless them and confirm them in their purpose.
Mikolaj GACEK, novice
[Video]