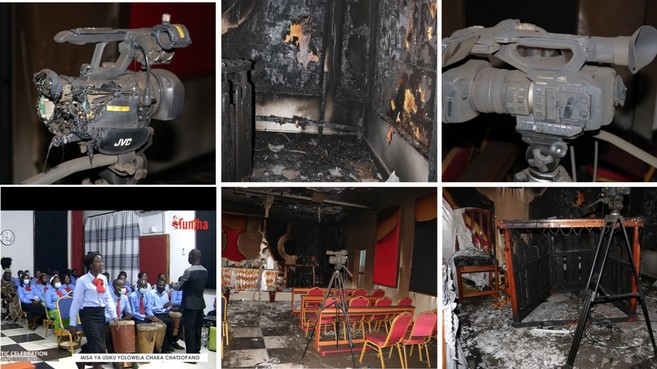 LILONGWE, Malawi- On the 1st of January 2022, here at Luntha Television studios in Lilongwe, we woke up with shock at around 4:30 am when the watchman realised that all seemed not well after noticing the smoke. We realised that fire had silently burned down one of the studios that we have been using as a chapel since 2019 when the Episcopal Conference of Malawi (ECM) asked Luntha TV management to beam daily live Masses amidst covid-19 pandemic lockdown.
On the eve of the inferno, we even had the end of year thanksgiving Eucharistic celebration in the same studio. Immediately the police, fire department and power supplier (ESCOM) were informed, and they responded swiftly and begun to assess the situation.
According to the assessment, the fire might have probably started from the corner that had the crib and the Christmas tree with the small Christmas lights. We are still waiting for the formal assessment report.
Deputy Director of Luntha TV responsible for Operations and Programs, Fr. Norbert Kashaija TUKWATANISE, SMM in sombre mood said the inferno caused a lot of damage.
“The fire caused a lot of damage and some of the items destroyed include; 2 studio cameras, 2 tripods, HDMI and SDI cables, 2 air conditioning equipment, sound proofing items, the whole ceiling of the studio, chapel seats, chapel decorations and altar clothing, a Marian statue and other chapel items. We really need help as we are working on what we can afford.”
That was a shock awakening to the new year 2022. As of now our television is back on air, however we need an urgent help because the studio chapel is connected to the main broadcasting studio. We need an overhaul technical assessment of the studio. It is unfortunate that Luntha TV studio is not insured.
According to the detailed statement of appeal by the Director of Luntha TV, Fr. David NIWAGABA, SMM approximately 30,617 Euros (MK 30,770,000 Local currency) is needed to replace the gutted equipment and renovate the studio.
On 14th January 2020, fire gutted down Luntha Tv broadcasting equipment in Malawi Telecommunications Limited (MTL) office in Lilongwe. The fire also destroyed broadcasting equipment of many broadcasting stations in Malawi.
Luntha TV is the only Catholic television station in Malawi. It is a non-profit making broadcasting station under the authority and competence of the Montfort Missionaries in collaboration with the Daughters of Wisdom under the Episcopal Conference of Malawi (ECM). It was founded as a part and parcel of the Church’s mandate to evangelize people in an integral manner (refer to 1965 Vatican II document Lumen Gentium; Modern Means of Social Communication; Special Synod for Africa 1995). It broadcasts 24 hours and seven days reaching out all regions and district of Malawi. Currently, through AZAM Channel platform Luntha TV is accessed in 26 countries in Southern Africa. It is also reached all over the world through social media platforms such as Facebook and YouTube.
Deacon Horrice MKANDAWIRE, SMM
Luntha TV Administrator and HR