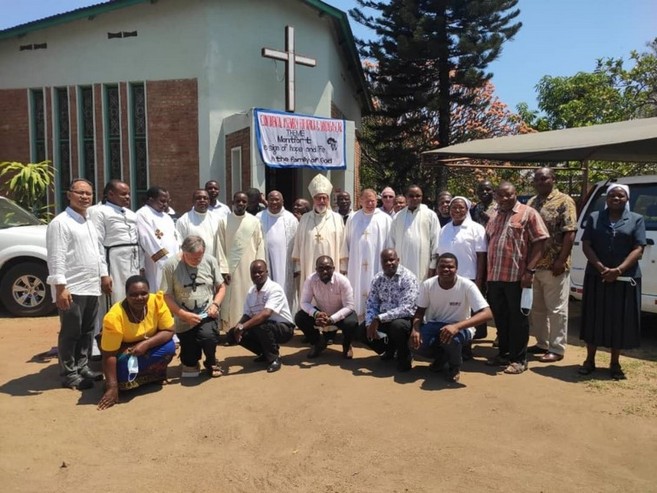 MALAWI - The long-awaited visit by Fr. General finally became a reality on 16th October 2021. After a pleasant day with him in the company of Fr. Felix Phiri, SMM, Fr. Arnold Suhardi, SMM and Fr. Jacob Otieno, SMM, we started parking early in the evening in preparation for our flight to Malawi early morning next day, 17th October 2021.
All went well and after landing in Lilongwe, we were connected to another flight to Blantyre where we spent the night at the Montfort House Nantipwiri. We were received by the Superior Delegate, Fr. Paul Mashonga, SMM and Fr. Samuel Satiele, SMM. Fr. Damian Abraham, SMM and Fr. Anthony Chilolo, SMM joined us later. The following day, we drove south heading to Mangochi on the shores of Lake Malawi where the Continental Assembly for Africa and Madagascar was to be held.
On the way, we made several detours, the first being to the Inter Congregational Institute (ICI) in Balaka where we met Fr. Louis Nkukumila, SMM and Fr. Paul Kumwenda, SMM. After a brief chat and some refreshments, we headed to the next stop which was the St. Louis-Marie de Montfort parish in Balaka. Here, we were received by the ever-smiling Fr. Eugenio Cucchi, SMM and Fr. Innocent Mwanoka, SMM who took us for a visit to the beautiful parish church. We made the last stop at the Montfort Media where Fr. Gamba, SMM welcomed us for lunch and Fr. Blaise Jailos, SMM took us for a tour of the Montfort Media project. After this detour, we drove straight to Mangochi where we were welcomed by Bro. Henry Chagoma, SMM.
Attending the Continental Assembly for me was a unique opportunity to interact and get to know many priests, brothers and sisters of the Montfortian Family. The Continental Assembly Opening Mass was presided over by Bishop Montfort Sitima of Mangochi Diocese who thanked the Montfort Missionaries for the immense contribution to the diocese both spiritually and materially.
The Superior General opened the Continental Assembly with the explanation of the logo for the Continental Mission Year with the theme, Montfort: Sign of Hope and Life in the family of God, its vision and objectives.  The first presentation was done by Bishop George Tambala, the Bishop of Zomba Diocese and the Archbishop elect of Lilongwe Archdiocese. The topic being: Gift of Religious Life in Africa and its Challenges. He began by stating that 'Religious life is a gift of God the Father through the Holy Spirit'.
The second presentation was presented by the Vicar General, Fr. Wismick Jean Charles, SMM and the session topic was: Towards an Integral Response to the protection of Minors and Venerable Adults. This presentation was followed by group discussions where members present gave their contributions.
Next was Fr. Samuel Satiele, SMM who read a report by Fr. Balaswamy Kata, SMM on Projects for Financial self-sufficiency and planning for the future. The discussion revolved around solidarity and self-sufficiency. Group work followed the presentation and different ideas on the topic were brought forward. Fr. Marco Pasinato, SMM, one of the General Councillors, followed with the topic on Formation, Accompaniment of young confreres (Ratio II). The dimensions of the Ratio II were discussed which are human, spiritual, intellectual and apostolic. He gave the presentation virtually via Zoom.
Fr. Arnold, SMM, one of the General Councillors, followed with the topic, Transmitting Montfortian Spiritual Heritage. He explained this by stating that one needs to share with others by telling, giving and passing on. This is to be done in a natural way and the members of the group are not just recipients but inform themselves so as to participate in the same mission. According to Fr.  Arnold, this testimony is interior and a special feature of Montfortian spirituality. Books such as God Alone and others, guide the members and this transmission is animated by Christian values such as detachment, evangelization, reliance on Divine Providence and so on. The members also understand and live with conviction which is drawn from intellectual and spiritual affinity to the teaching and values of Montfort's life.
Fr. Felix, SMM followed with the presentation of Mission à la Montfort in Africa and Madagascar. He stated that a missionary must be in a hurry to win souls for Christ and be ready for persecution.
The final presentation was from Fr. Jailos Mpina, SMM on Connection and Communication. He stressed the importance of building bridges among entities and putting together talents, skills, resources, experience of cultures in communication of news to the world without borders. He emphasized the importance of visiting our website: www.montfortian.info.  He also encouraged everyone to share life-giving experiences for the website.
In between the major presentations, testimonies and experiences from the Vice-Province of Madagascar and the delegation from Francophone Africa were communicated via video link. Lay Associates from Madagascar did likewise while Anglophone delegates from Malawi and Kenya presented their experiences and challenges.
Fr. Mashonga, SMM concluded his closing remarks with the acknowledgement of the Continental Assembly Coordinator, Fr. Nobert, SMM, the translators, namely Sr. Immaculate Makina, DW and Bro. Prudence, SG and Bro. Henry Chagoma, SMM together with the support staff of the Montfort Lake House Namiasi. Father General gave a commissioning statement.
George Montfort