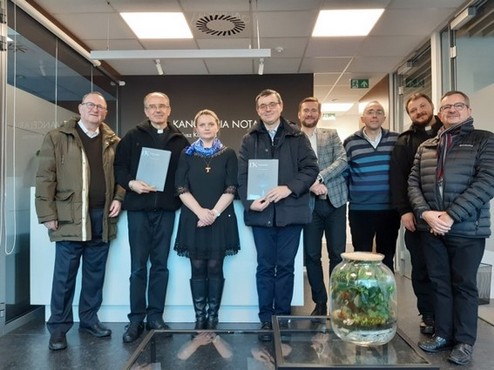 CZĘSTOCHOWA, Poland - Last November 22, at Częstochowa, the Brothers of Saint Gabriel, represented by their Vicar General, Br. Dionigi TAFFARELLO, and the Montfort Missionaries of the Italian Province, represented by the Provincial Fr. Mario BELOTTI, SMM and the bursar, Fr. Angelo SORTI, SMM, signed the deed of transfer of ownership of a house located at about two kilometers away from the Holy Cross Basilica where the most famous icon of the Black Madonna is kept and venerated.
The history of the house is linked to the presence of the Brothers of St. Gabriel, who arrived in Poland in 1998. The house was intended for students attending the University of Częstochowa where the Brothers were engaged in teaching French and Spanish. Two years later, due to lack of students, the house changed its role and was adapted to accommodate groups of pilgrims and retreatants. This went on until 2018, the year the Brothers decided to close their mission in Poland.
In the meantime, the two general administrations of the Brothers of St. Gabriel and of the Company of Mary concurred with the idea of continuing the Montfortian presence in Poland by entrusting the house to the Montfort Fathers. This new development began in November 2010, with the arrival of Fr. Mihovil FILIPOVIĆ, SMM, who, for five years stayed with the brothers of St. Gabriel until, in 2016, the community of the Montfortian Missionaries was established, juridically linked to the Province of Italy.
Right from the start, the confreres have gained trust, support and appreciation from the local Church and people, through their apostolate of preaching retreats, offering spiritual direction, animating ecclesial groups and the Association Mary Queen of Hearts (which enrolls priests, religious and laity), publicizing and diffusing books on Montfortian spirituality, receiving and accommodating pilgrims, accompanying young people through their vocational discernment.
A significant statement of appreciation for our community of Częstochowa was expressed by Cardinal Stanisław Jan DZIWISZ, Archbishop emeritus of Krakow and former secretary of John Paul II, on the occasion of his recent encounter with the Provincial and Bursar of Italy. After showing them the Polish edition of the Treatise on True Devotion which John Paul II always carried with him, the cardinal said: "Your community is working well here in Poland because it is made up of men forged in the spirit of this book”.
Fr. Mario BELOTTI, SMM