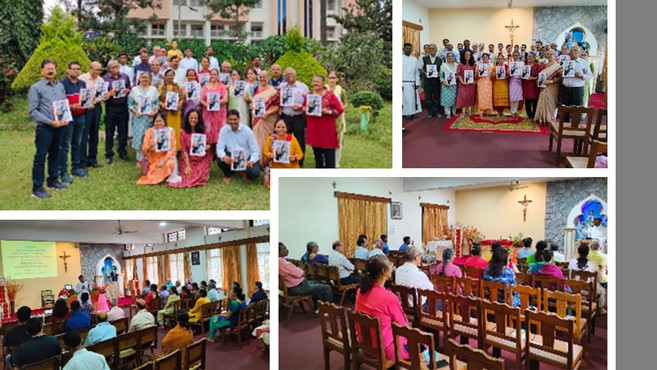 BANGALORE, India - It was a long-awaited dream come true! To prepare the first batch of Montfort Associates for their Total Consecration to Jesus through the hands of Mary has been a great challenge. We, the Marian Centre team, met and planned accordingly for the 33 days of Montfortian Retreat or the Totus Tuus Journey (TTJ) in view of the Consecration of our lay associates which is the necessary element for their identity as Montfort Associates and collaborators in our Mission. Since the group consists of members who are rather aged, it is practically impossible to organize the 33 sessions. Rather, it was summarized into 4 modules program: first session on the ‘Knowledge of the World’, second session on the ‘Knowledge of the Self’, third session on the ‘Knowledge of Mary’, and the last session on the ‘Knowledge of Jesus’. These were conducted on different Sundays of the past three months. The members made their efforts to come and to participate despite of their age difficulties and other practical challenges.
First session was organized at Maria Bhavan, animated by Fr. Reni Joseph, SMM on 5th March 2022. Around 30 members were present. On the same evening, we had the inauguration of the Inter-Continental mission year in India along with the ‘Silver Jubilee’ celebration of our three Priests. The second session was organized at Maria Bhavan on 26th June 2022, prepared and given by Fr. Gerald SMITH, SMM which was well appreciated by the 27 participants. The third session was held at Maria Bhavan, prepared and given by the Provincial, Fr. Peter MASCARENHAS, SMM on 24th July 2022, about 27 of them participated and the final session was held on 21st August 2022, animated by Fr. Reni.
During the holy Eucharist that was celebrated by Fr. Johnson, SMM, 26 members made their Total Consecration solemnly with 4 weeks of special preparation (TTJ). Fr. Peter explained the meaning of the Total Consecration during the Mass and Fr. Deepak prepared the souvenir with the Consecration formula in it, where they had to sign after the Consecration. This souvenir was given to them as a remembrance of their commitment for the mission.
I appreciate each one of them and the Marian Centre team who worked behind this successful task. A special thanks to the Provincial who received their act of Consecration and our priests in hearing their confession to prepare them for the Total Consecration according to our Holy Founder, St. Louis-Marie de Montfort. Many thanks to Fr. Deepak for printing the souvenir on time and making it available. Let us continue to help the associates to remain committed to their consecration.
Fr. Reni JOSEPH, SMM
Director
Marian Centre, Bangalore-29