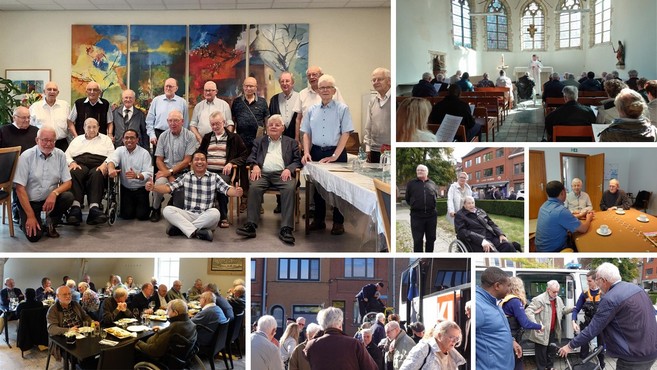 ‘In Cauda Venenum’
VROENHOF, Netherlands - It was a beautiful day and a nice excursion to the 'new' Montfortian home of the Belgian confreres in Kessel-Lo. The driver of the bus was well instructed and let go of us at one point. And we, after a short church service in the nearby chapel, just wandered around the monastery to see everything there was to see: confreres, rooms, dining room, kitchen, laundry room, toilets, basement and a whole lot more.
When boarding the bus, we had already overcome an obstacle. Then suddenly, Br. Lei Louis proved to be too heavy for the chairlift of the bus, which was stuck as if it was nailed to the ground. After some struggling, it finally worked and we could hit the road. And no disturbances occurred along the way. But, as the title suggests, 'in cauda venenum' or 'the poison is in the tail'.
We were at the end of our visit and headed out. So did Fr. Peter Hoogland with his walker. But, we had to turn right on the outside and he turned left. And then, we were in big trouble! Suddenly, we had lost one ‘sheep from the flock’ and it was nowhere to be found. We called in our own search parties but they didn’t find anything. We still had an ace up our sleeve which was the police. Fortunately, they took effective action. Let the Belgians have a go! They spotted Fr. Peter somewhere nearby, loaded him up and delivered him to us. And then all we had to do was drive home to the Netherlands.
That too went well. We all got out in Vroenhof in one piece. And the chairlift of the bus worked excellently. So Br. Lei also landed safely again, despite not having a parachute.
When can we expect something like this again? Please don't let the interval last too long. We are still mobile enough!
Fr. Math VROEMEN, SMM
[Video]