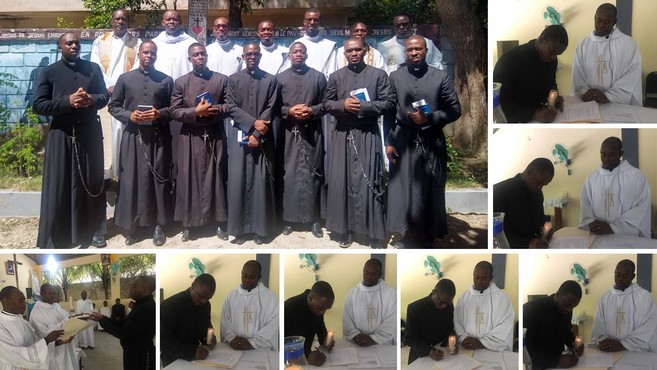 HAITI - The vocation to the religious life is becoming increasingly rare in our world today. The young people, preoccupied with the questions of survival in a society in constant turmoil and the resulting doubts, are afraid to engage in this way of life based essentially on faith and trust in the Lord. But all is not over. The Spirit still blows and manages to touch hearts to prepare them and send them into the vineyard of the Lord. The Montfortian province of Haiti still has the privilege of welcoming young people who come knocking at its door in order to respond to their vocation within the congregation. We give thanks to God! Indeed, on Friday, October 7, 2022, on the feast of Our Lady of the Rosary, seven new brothers took the vows of poverty, chastity and obedience for the first time, thus becoming members of our great and beautiful family.
On October 1, 2021, a group of seven young people began their novitiate with the accompaniment of Reverend Father Prophy Prophet, SMM, master of novices. After a year marked by many events on the national level, the time of the novitiate came to his term and the seven decided to say "yes" which was approved by the provincial superior, Jean Jacques Saint-Louis, SMM and his Council. The date that was chosen for the first profession of our brothers was Friday, October 7, 2022. As often in recent days in Haiti, there were many uncertainties due to the various turbulences that have been taking place in the country for several weeks. Roads are still blocked, looting attempts are intensifying, bandits are more and more the law everywhere in the country, especially in the metropolitan area, situations put in doubt the realization of any large-scale activity. But Providence always intervenes.
When the day arrived, the chapel of the scholasticate was ready to welcome the event. But the provincial superior, unable to find passage, was forced to delegate Reverend Father Lanès Phanor, SAMM, rector of the scholasticate, to receive the vows of the (future) professed. And it was Father Lanès who presided over the ceremony accompanied by the novice master and three other confreres who do the mission in the region. The assistance was made up of scholastics, novices, faithful of the chapel and some members of the families of the professed (those who live in the area itself). The celebration began at 9 a.m. in a fairly peaceful atmosphere with the songs of a well-orchestrated choir.
Father Lanès, in his homily, retained three fundamental pieces of advice for the newly professed: to live in closeness to Christ, to be joyful religious and to live in fidelity to his commitment. And all this must be done in the school of Mary, she who consecrated herself in closeness to her Lord, in joy and in fidelity. With a convinced and motivated air, Brothers Fritz Monjoie, Carl-Henz Jean-Jacques, Jean-Ely Isaac, Céclerson Blanc, Phiguerson Legrand Honora, Claude Paul and Peterson Damier pronounced their vows according to the constitutions of the missionaries of the Company of Mary for a year. It should be noted that the joyful aspect of this great event was thwarted by the death of the father of Brother Carl-Henz Jean-Jacques, one of the professed, a few days before.
The congregation, especially the province of Haiti, is happy to welcome the seven new members who will go to the scholasticate to continue their initial formation through philosophical and theological studies. The newly professed count on the prayers of the whole Montfortian family to be able to continue to live their consecration in closeness to Christ, joy and fidelity. If the many episodes of "country lock" in Haiti prevent us from traveling on human roads, the ways of the Lord remain and remain accessible, and He wants to hold our hands to travel with us. Let's trust Him!
Bro. Ekenley JEAN-NOËL, SMM