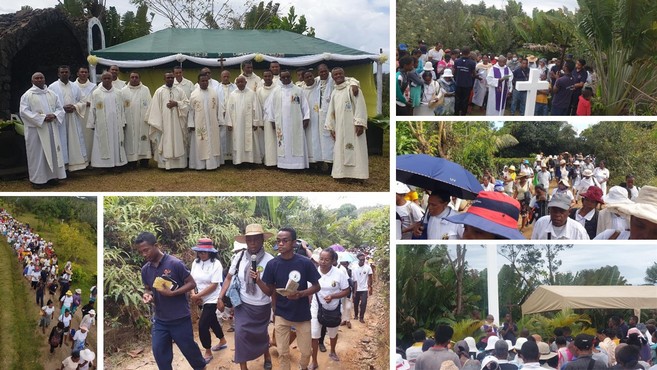 ANALAMALOTRA, Madagascar - On the occasion of the opening celebration of its 90-year presence in Madagascar, the Entity of Madagascar organized a pilgrimage to Analamalotra Tamatave on September 10-11, 2O22.
The faithful from different parishes held by the Montfortians had come to this great meeting to pray together during these two days. Most of the confreres, the great Montfortian family, had also come to honor this first Montfortian Pelé Analamalotra.
The first day was marked by walking together to the place of pilgrimage. Upon arrival, a conference on Mary and the Marian devotion of Father de Montfort was held. It was followed by a holy Mass presided over by Father Vicar General Jean Aimé RAKOTOARIMISY. In the afternoon, there was the Stations of the Cross followed by different prayer activities towards the end of the day. An all-night prayer vigil was held at the foot of the cross and the grotto. During this prayer vigil, there were testimonies given by the lay associates.
The second day, September 11, was the closing Mass of this pilgrimage and the official opening of the celebration of 90 years of our presence in Madagascar. It was presided over by the Superior of the Vice-Province, Father Bruno RANDRIANASOLO KIKY, SMM who, during his sharing, strongly invited us to the fidelity of our adherence to God. “The Father went out in search of his prodigal son” Luke 15, 28b. Then, he thanked all those who contributed to the realization of these events. After lunch, everyone prepared for the return. Approximately around 600 worshipers were present.
We wish to hold this pelé every year.
Long live the Montfortian pilgrimages.
God Alone.
Bro. Joseph Victor RATAFITANIAINA, SMM
[Video]