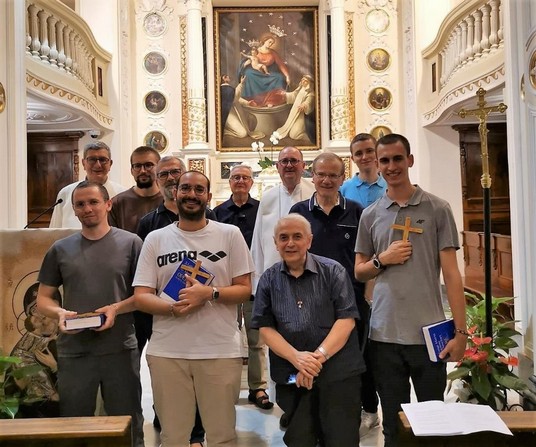 SANTERAMO, Italy - On Thursday, September 8, feast of the Nativity of the Blessed Virgin Mary, Damian, Mikolaj and Alessandro, at the end of the year of postulancy in the community of Rome, officially began their novitiate in Santeramo in Colle (Bari).
During the celebration of Vespers, in an atmosphere of simplicity and sobriety, surrounded by the confreres of the community, they asked the Provincial Superior, Fr. Mario BELOTTI, SMM to be able to live the Montfortian life this year, to follow perfectly Christ, the Wisdom incarnate, according to the charism of St. Louis-Marie de Montfort.
By accepting their request, Father Provincial invited the three novices to live this time of grace at the school of the Virgin Mary, cultivating in particular the Gospel attitude of listening. Listening to the Word of God, to oneself, to formators, to the writings of Montfort, the fellow and the Christian community of Santeramo in Colle, which already welcomes them with great joy.
With the hope that it will be God who will assist them and accompany them in the work they propose to undertake and that Jesus Christ is for them the only Teacher of truth, the Provincial Superior handed over the Writings of Saint Louis-Marie to Damian, Mikolaj and Alessandro, encouraging them to know and appreciate the teachings of the Founder.
In turn, the three novices presented the "cross of Poitiers", prepared the previous days, an expression of the desire to grow as pupils of crucified Wisdom.
Here is a brief presentation of the three novices.
Damian Lula: “I was born on December 23, 1988 in Myszków, Poland. I met the Montfort Fathers thanks

to Brother Henaro, of the Brothers of San Gabriel, during a pilgrimage to the sanctuary of Jasna Góra in Częstochowa.
The regular discernment meetings in the community of the Fathers slowly made me discover a call to the priesthood. So, at the end of August 2019, I started the first year of postulancy in the Montfortian community of Częstochowa.
At the end of June 2020, I moved to Rome to continue my formation journey in the second year of postulancy, at the end of which I expressed the desire to enter the novitiate".
Alessandro Agricola: “I come from Agrigento - Italy and I am 26 years old. The "adventure" of my vocation

began in 2015. After my baccalaureate in accounting, I returned to the faith and began a path of spiritual growth nourished by the Word of God and lectio divina, by the Eucharist and by the sacrament of Reconciliation. In this way, I sum up the beauty of being close to Jesus and of experiencing, even in difficulties, that true peace that my heart was looking for.
I knew the consecration to Jesus through the hands of Mary taught and proposed by Montfort and, after an itinerary of preparation, on April 4, 2018, I gave myself everything to Jesus through Mary, joining the group of consecrated lay people in my parish. Considering this to be a precious gift, I felt a strong desire to offer the same path in academia and among my friends.
In September 2019, I participated in Loreto in the days of Marian spirituality, organized by the Montfortian missionaries, where I met the person in charge of vocational animation. I undertake a path of discernment and, after having obtained my diploma in linguistic and cultural mediation, I ask to be admitted to the postulancy. Not everything was easy due to the detachment from my family, my friends and my lifestyle, but in the first experience in a Montfortian community, I felt the support of the grace of God, of the formators and prayers from many people. I am sure that all this will not be lacking even in the year of novitiate which has just begun".
Mikołaj Gacek: “I was born on May 30, 2000 in Breslau (Wrocław), Poland. After graduating from high school, a

serious change takes place in my life: from purely worldly and temporal priorities, I begin to seek values ​​that do not fade. The subsequent conversion and openness to Marian spirituality aroused in me a great desire to consecrate myself entirely to Mary.
After the pilgrimages to the Sanctuary of the Black Madonna in Jasna Góra and then to Medjugorje, I had a first glimpse of my vocation, but nevertheless in October I started my studies in Energy Engineering at the Polytechnic School in Wroclaw. The “providential” closure of universities, due to covid, brings out my truest desires and I begin to discern my vocation. I meet the Montfortian community of Częstochowa, I know its apostolic work and I explore the spirituality of Montfort, of which I had already read something in the Treatise of True Devotion.
After a period of vocational discernment in June 2020, I entered the Montfortian community of Częstochowa and a year later, I started my postulancy in Rome”.
Alessandro AGRICOLA, novice